REGINA -- Anyone heading for a COVID-19 test in Regina was greeted with a long line on Wednesday as demand grows due to the increasing spread of variants in the city.

"More people are going to be contacts and therefore told to go to test, but I’m also hopeful that some of that is representing people who have an increased awareness again that maybe I should go for testing," Dr. Cory Neudorf, an epidemiology and public health professor at the University of Saskatchewan, said.

Regina has averaged 960 tests per day over the past seven days, which is up from 643 over the previous week. 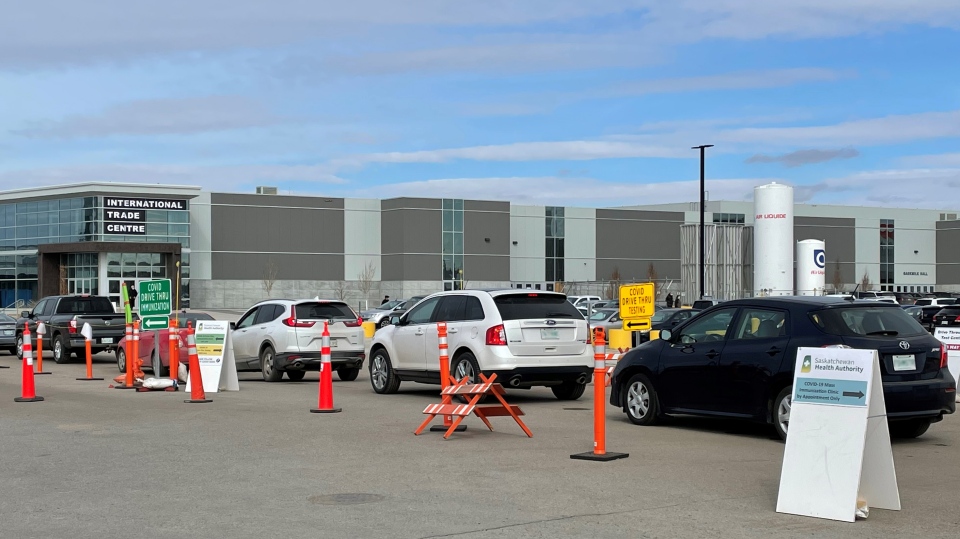 There have been over 1,000 tests performed on four of the last five days, which had only happened four times previously during the pandemic.

While the increased testing numbers are a positive sign, the seven-day average for test positivity rate increasing is not – it went from 8.5 to 9.8 per cent this week.

"We’d like to see that test positivity come down a lot more because it would mean we’re doing a better job at getting tests done out there as well as getting more control of the outbreak," Neudorf said.

The demand for testing remained high on Wednesday as the wait time at Regina’s drive-thru testing site was between 3-5 hours throughout the day, compared to one hour in Saskatoon and under 15 minutes in Prince Albert and Yorkton.

Regina’s drive-thru testing site is open from 11:30 a.m. to 7 p.m daily – however the drive-thru site was forced to close an hour early Wednesday, due to a high demand for testing. CTV News reached out to the Saskatchewan Health Authority about whether it plans on increasing hours of operation, but didn’t receive a response in time for deadline.

On Tuesday, the SHA said it has put an extra focus on Regina when it comes to contact tracing and has resources available to expand testing.

Livingstone added the SHA continues to monitor the testing capacity in Regina will add more staff as needed.

"Based on what we’re seeing, we’ll just bring more resources on, we have those resources available so that we’ll be able to offer more tests," Livingstone said.

The SHA said in addition to the drive-thru testing, people can still call 811 for a referral to the testing clinic in Regina, which isn’t at capacity.