The Muskowekwan First Nation has laid out 35 pairs of children’s moccasins and shoes to honour each unmarked gravesite located at the site of its former residential school.

The First Nation said the shoes will also honour the 215 children whose remains were found at a Kamloops residential school site last week.

The last residential school in Saskatchewan to close its doors, called Muscowequan Indian Residential School, was located on Muskowekwan First Nation. It opened in 1886 and closed in 1997. 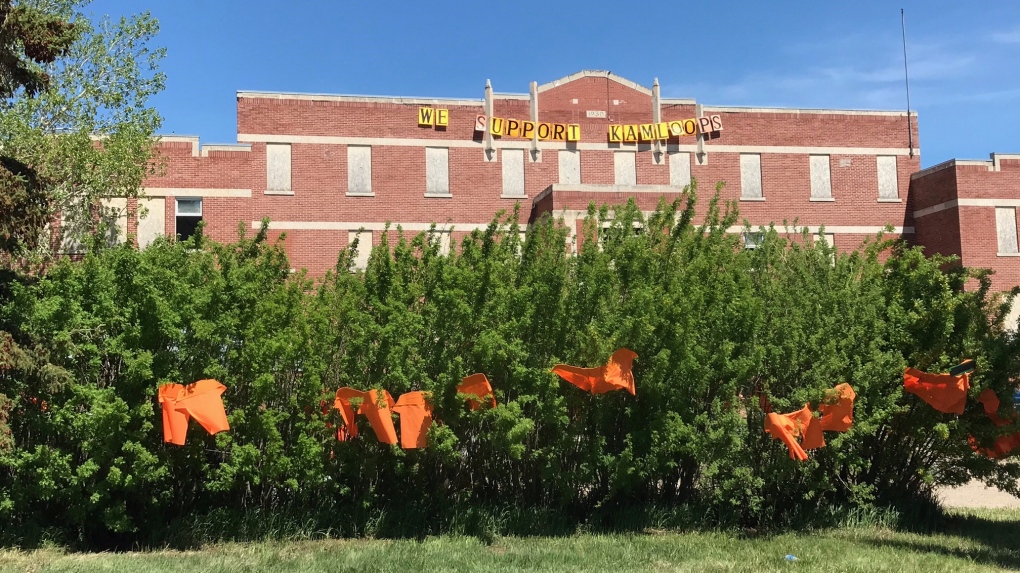 A sign that reads "We Support Kamloops" hangs on the front of the Muscowequan Indian Residential School, the last residential school to close its doors in Saskatchewan in 1997. (Stefanie Davis/CTV Regina)

On Tuesday, dozens of people gathered at the school site to pay tribute to residential school attendees and survivors across the country.

Roland Desjarlais attended the Muscowequan Indian Residential School for nine years. He was taken from his family when we was only seven.

“I thought I was only going to come here to visit because I live so close, but I couldn’t go home,” Desjarlais said. “When you’re just a little child, you’re crying day after day after day.”

His family lived just metres away from the school.

“The thing about me being here is that I could see my mother doing laundry outside,” he said. “Being seven or eight years old and not being able to go see her, to go join her – how come I can’t just go home? You absolutely do not understand any part of that.”

He remembers playing sports during his days at the school, which he said he enjoyed. But he also remembers physical abuse when he was caught trying to learn his language from other students.

Desjarlais said his father spoke Cree. He never got to learn much of the language because of his time at the residential school. Now he wishes he could pass it on to his children and grandchildren.

Through that process, along with water line construction done in the 1990’s, the First Nation has identified at least 35 graves. It said there are likely more still waiting to be found.

“Our elders have told us that there’s a lot of areas here that haven’t been explored and eventually we will do that,” Cynthia Desjarlais, a councillor on Muskowekwan First Nation, said at the ceremony on Tuesday.

She said the universities will come back to explore more of the land, but there have been delays due to funding and the COVID-19 pandemic.

Now the Federation of Sovereign Indigenous Nations (FSIN) and the Saskatchewan government are calling on the federal government to help fund radar ground searches at residential schools in Saskatchewan.

“Then we deal with the findings. Obviously closure and that healing journey would continue for so many families,” FSIN Chief Bobby Cameron said.

Cameron said he’s proud of Saskatchewan for being one of the first regions to “hit the ground running” with organizing radar ground searching and to have the support of the premier.

“We met and discussed [on Monday] with three radar ground search companies who are ready to do the work,” Cameron said.

Cameron said he’s hopeful the process could start by next week.

Hundreds of Ukrainian fighters, including wounded men carried out on stretchers, left the vast steel plant in Mariupol where they mounted a dogged last stand and turned themselves over to Russian hands, signalling the beginning of the end of a siege that became a symbol of Ukraine's resistance to Moscow's invasion.

Queen Elizabeth II made a surprise visit Tuesday to a train station in central London to see a newly completed subway line named in her honour. The 96-year-old monarch, who has reduced most of her public engagements, appeared Tuesday at Paddington Station.

Prince Charles and his wife, Camilla, are in Newfoundland and Labrador's capital today to begin a three-day Canadian tour focused on Indigenous reconciliation and climate change.

Twitch, a live-streaming giant, comes under scrutiny after Buffalo shooting

Twitch, the livestreaming giant popular among video gamers, has been thrust into the national spotlight after the suspect in the Buffalo grocery store mass shooting tried to broadcast the attack on the platform.

Next steps for Finland, Sweden on NATO membership

Finland and Sweden have signalled their intention to join NATO over Russia's war in Ukraine and things will move fast once they formally apply for membership in the world's biggest security alliance.

Canadian Blood Services has issued an immediate call for donors in light of a recent lull in attendance and rising cancellations.