REGINA -- With Ceres Global Ag set to build a canola crushing plant of its own in southeastern Saskatchewan, it's the latest in a growing list of oilseed projects set to give canola producers better access and more options.

The $350 million facility will be built in Northgate, located along the United States border southeast of Estevan and is expected to be capable of processing 1.1 million metric tons of canola annually for both food and fuel uses.

It follows recent announcements that both Cargill and Viterra plan to build canola crushing facilities of their own in Regina, the Viterra plant set to be the largest in the world.

Richardson International also announced this year it would double the capacity of its crush plant in Yorkton, while Cargill announced upgrades would be done to its existing plant in Clavet. 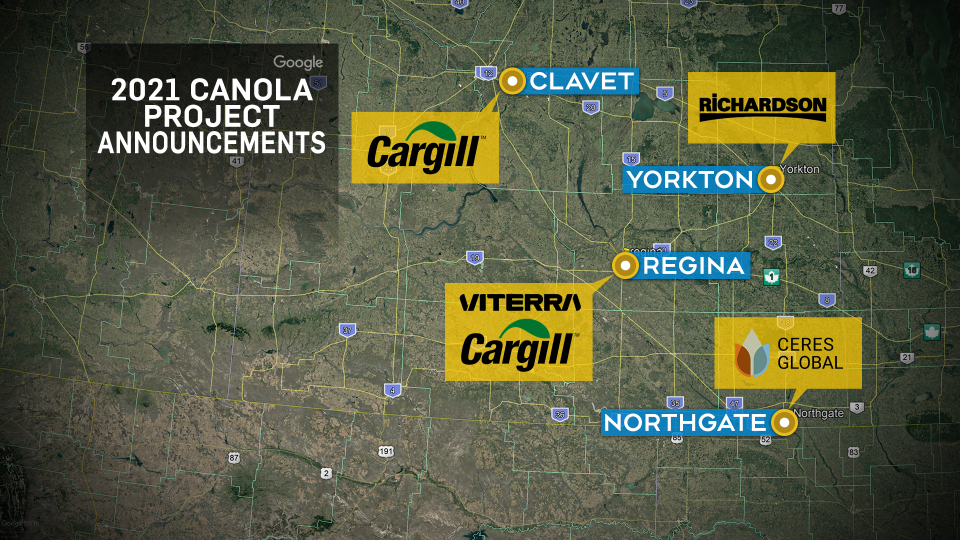 Moosomin-area Canola producer Steven Donald said the three new plants will give farmers like himself more options and better competition.

"The value added is happening here in Saskatchewan, where the product is grown and I think that’s a big bonus," Donald said.

Todd Lewis, the president of the Agricultural Producers Association of Saskatchewan, said a push for fuel that's better for the environment is a major factor in the uptick of oilseed production growth in Saskatchewan.

"Biodiesel is going to be an important product going forward for not only Saskatchewan but the entire country, so it's good to see it processed here and put into fuel here. Then it's going to be exported across the province and, in the case of a lot of the biodiesel, it might even go into the United States," Lewis said.

According to the Canola Council of Canada, canola-based biofuel is a cleaner burning alternative to diesel fuel that can be blended for use in all kinds of vehicles.

Lewis said despite the increase in processing capacity, he doesn't expect canola crop production in the field to see a huge spike.

“We’ll see an increase in production but not necessarily a whole lot more acres, but just better agronomy and better genetics," Lewis said.

It's agronomic progress that Donald has seen since his first canola crop in 1998 yielded 25 bushels to the acre.

"The last couple years we’ve averaged well over 60 bushles to the acre, so that’s the advancements I see to the amount of product we’re growing," Donald said.

The project from Ceres Global Ag puts the total investment in Saskatchewan above $1 billion in 2021, with most of the new crush plants set to be completed by 2024.