COVID-19 survivors in Sask. struggle with the lasting effects of the disease

REGINA -- One year into the COVID-19 pandemic in Saskatchewan, doctors know more than they did when the province confirmed its first case on March 12, 2020. But they still don’t know everything about the virus.

One thing they do know, COVID-19 moves quickly.

Michael Hawkins came home from work tired on a Friday afternoon and went to bed at 2:30 p.m. By Monday, the 58-year-old had been admitted into the intensive care unit at Prince Albert’s Victoria Hospital.

For Chad Bulych, it started with a slight cough, which progressed to a more extreme cough and then a fever. The 49-year-old from Ituna was tested for COVID-19 on a Monday and by Wednesday he had slipped into a coma at the General Hospital in Regina.

But COVID-19 doesn’t impact everyone in the same way.

Some experience debilitating symptoms that linger for months on end, but for others a COVID-19 diagnosis meant nothing more than fatigue and a slight cough.

Before going for a test, Don Pho just didn’t feel like himself. The 78-year-old Regina resident and his wife Carolyn both tested positive for the disease in February. Carolyn was asymptomatic and as for Don’s symptoms, he “didn’t have a heck of a lot.”

The virus – first reported as a cluster of what was believed to be viral pneumonia in Wuhan, China – was thought to primarily affect the lungs. But as COVID-19 raced through cities and towns around the world, the symptoms went beyond the respiratory system; affecting hearts, muscles and minds.

“IT FELT LIKE I WAS UNABLE TO SPEAK OR MOVE”

After a few days in ICU, Michael Hawkins got a rapid test and confirmation he had COVID-19 on Nov. 17. He spent a total of 12 days in the hospital in November and was admitted again in January for a short stint. 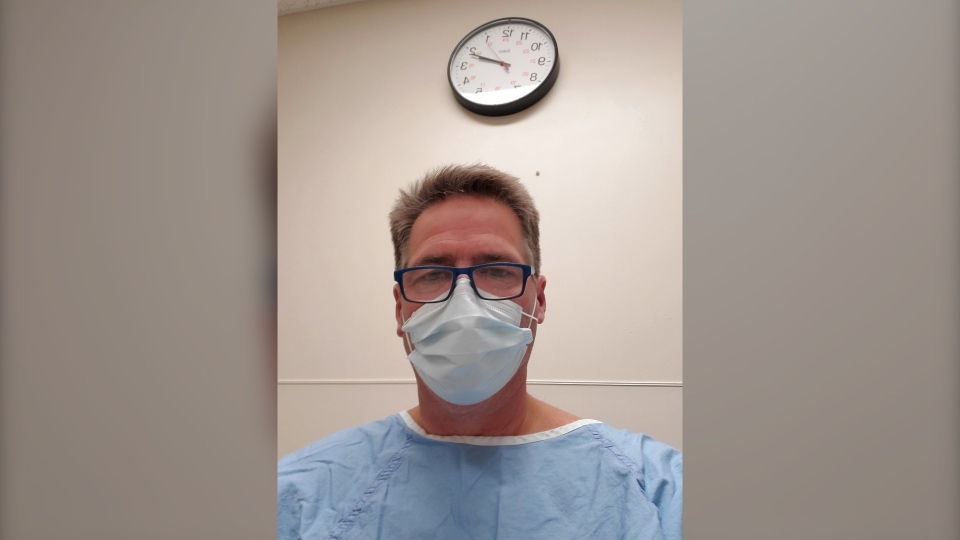 His symptoms first appeared as classic COVID symptoms – tightness in the chest, a cough and stomach problems – but as time went on, the disease manifested itself in his heart and brain.

There was inflammation around his heart that mimicked a heart attack. During his second hospital stay, doctors discovered he had several mini strokes and a recent MRI in Saskatoon revealed brain damage.

He lost his balance and often lost his memory.

“The memory loss was pretty severe for a while. I’d have these episodes where I’d just completely blank out and go almost catatonic. It felt like I was unable to speak or move,” said Hawkins.

Chad Bulych’s muscle function wasn’t the same when he came out of a month-long coma, which means nothing is as simple as it once was. 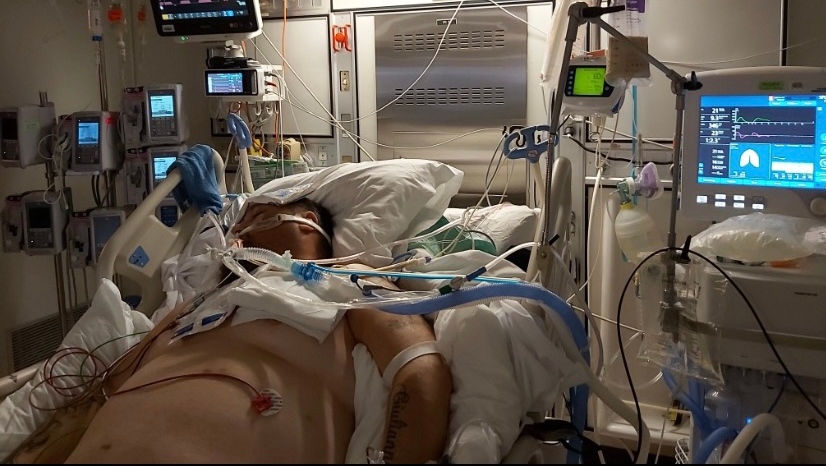 Following more than six weeks in the hospital, the 49-year-old – who has Type 2 diabetes and high blood pressure – returned home on Dec. 18. At first, he was on oxygen 24/7, but now he just needs it once in a while.

If he stands up too fast he gets winded and weak and he gets aches and pains in places that have never bothered him before.

Bulych didn’t realize he no longer had the muscle strength to get out of the bathtub until he was in it and he pulled a leg muscle when he kicked the blankets off his bed.

He’s also experiencing unexpected side effects, like hair loss and dry skin from being on oxygen.

Dr. Bonnie Richardson is the physician responsible for supporting acute medicine services during the COVID-19 pandemic in Regina. She said they’ve seen some patients who recover from the disease, but are left with COVID-related chronic illnesses.

Don Pho describes his symptoms as a four out of 10. He wasn’t very talkative, which was unusual for the chatty senior. He lost his sense of taste and smell – both have since returned – and was left with a funny coating in his mouth.

“I remember trying to taste a cheeseburger and it just didn’t taste normal,” said Pho.

He knows he and his wife Carolyn were lucky. They’re both 78 and have a variety of underlying conditions. Carolyn has asthma and Don has an irregular heartbeat, high blood pressure and vertigo. Both have sleep apnea.

He’s seen people on TV who have a much harder time with the disease. He even knows people who haven’t survived it: his 86-year-old neighbour and his son’s mother-in-law, who was the same age as the Phos.

Though a week of bed rest was good for his knees and his lack of appetite helped him drop 10 pounds, Pho said he wouldn’t wish the virus on anyone.

“I took it very seriously and I do now today, and I think that the problem is that you can’t let your guard down,” he said

According to Dr. Richardson, there are a few reasons for the disparity among COVID-19 patients. People with chronic diseases, such as diabetes, or medical illnesses like heart disease are at a higher risk of having severe COVID-19 symptoms. But doctors have also seen young, healthy people fall gravely ill.

“Part of that is if you're very young and healthy and have a very robust immune system, your own immune system can have such a response to an illness that it can make the illness worse. So we've seen the whole range of people from the young, to the elderly,” she said.

“IF I CATCH IT AGAIN I PROBABLY WON’T MAKE IT”

The side effects of COVID-19 extend beyond physical symptoms. Anxiety and depression are both listed as long-term impacts by the World Health Organization.

Bulych worries about going out. When he’s at a restaurant, he wonders who was at the table before him. Normally he wouldn’t think twice about grabbing a coffee, but now he stops to think about who else touched the cup before taking a sip. He also worries about catching COVID-19 a second time.

“I made it through once. And it was very close that I didn't make it. That's always in my head, if I catch it again I probably won't make it,” said Bulych. 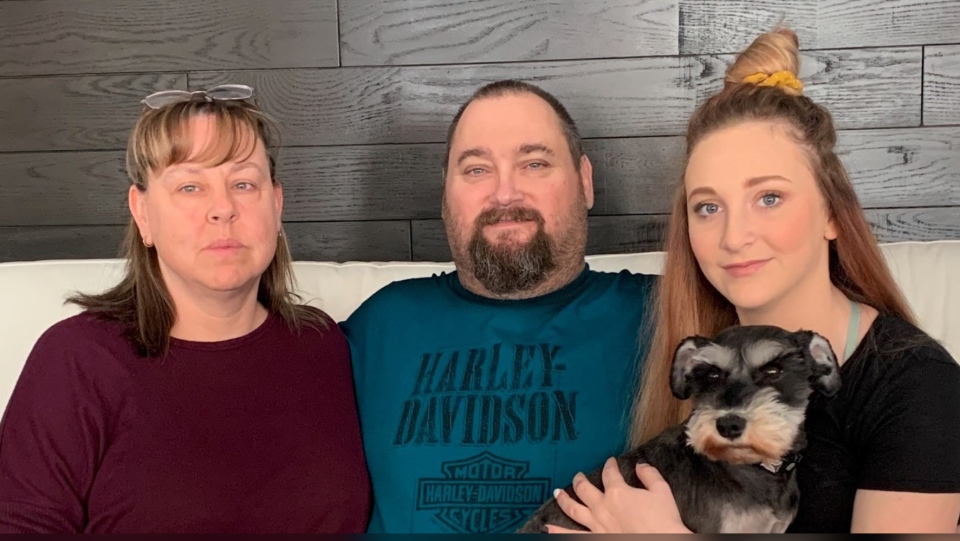 Hawkins limits his outings. He tags along when his wife goes for groceries, but stays in the car.

Both men are concerned about getting back to work.

Bulych owns a scrap iron recycling business with his brothers. He used to be able to drive the truck for hours without a problem, but now he’s sore after driving for a half hour and is in instant pain when he hits a bump.

Hawkins is the bishop of the Saskatchewan Anglican Diocese. Before his second hospitalization, he returned to work for two weeks in January. He plans to try getting back to work again in another few weeks. 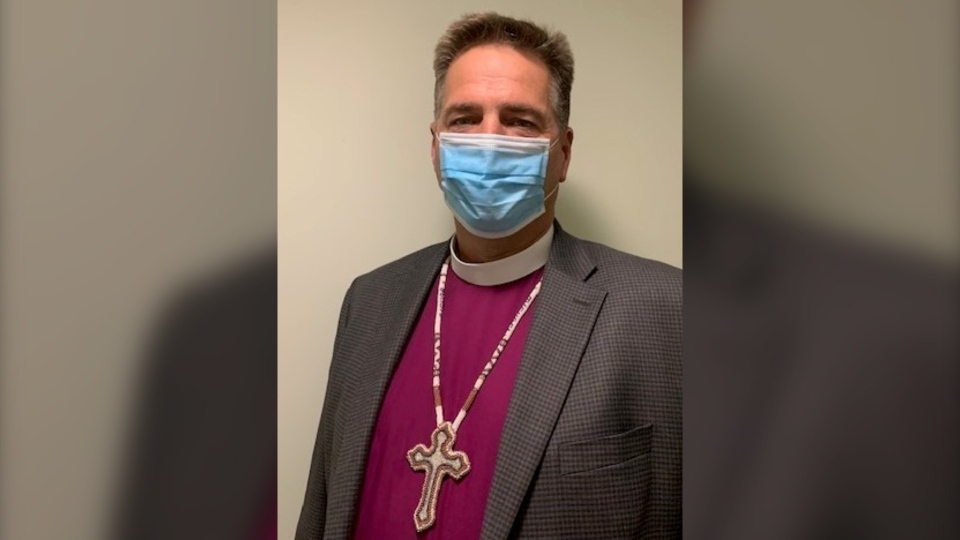 “I don't think there's anyone whose job [doesn’t] require some kind of short term memory, you can cope with devices and things to remind you, but there's still a little bit of an issue with that. I'm 58 and your memory doesn't improve as you age, but [the memory loss] was something different,” said Hawkins.

He looks forward to medical appointments just because they’re an outing. Being in the church business, he misses the socialization and admits he even misses the difficult people.

“I miss seeing people face to face. I miss an unguarded hug and even a kiss on the cheek.”

Nearly four months after his initial diagnosis, doctors have just started talking about recovery with Hawkins.

It’s lifted a bit of his anxiety, but he’s still left with some mysteries.

“The hard part with a disease that is so unknown is in some cases they'll tell you, ‘Look, this is the reality.’ And you have to figure out, what can I fight and what do I have to accept,” said Hawkins.

Dr. Richardson said physicians are finding out more about COVID-19 every day.

“It's a very unique disease... we're learning more about it and we're seeing these long-term effects and I think that's going to be a big challenge for us. Even if we got rid of every single case of COVID in the short term, people are going to have significant challenges that potentially could be years,” said Dr. Richardson.

Bulych hopes he’ll get to a point where he can just do normal activities again.

“I don't know how long it's going to take yet before I can resume to do some of the things I used to do. Right now, I'm hoping to be able to ride my bike again but I don't know if my legs are going to be strong enough to hold it up,” said Bulych.

A WARNING FOR OTHERS

Neither Bulych nor Hawkins or Pho know for sure how they contracted the virus. They thought they were taking the proper precautions; they wore masks, washed and sanitized their hands but COVID-19 still caught up with them.

They’re just three of the more than 30,000 Saskatchewan residents who have tested positive for COVID-19 in the past year. More than 400 people who tested positive did not survive the disease.

As COVID-19 was slipping into the province one year ago, Hawkins remembers being cautious and concerned – but he underestimated how long the virus would stick around.

“I do remember saying to someone, ‘Look don't think it'll be done by summer, but I think by September we'll be back to normal,’” said Hawkins.

“I've shared my story, partly because I want people to know that it's real. You know, I've been pretty sick for four months.”

At the beginning, Bulych was skeptical of COVID-19. Though he still did his part to stay safe, he didn’t know anyone who had caught it. Now, he knows it’s real with every aching muscle in his body.