After a week of football festivities in Regina, Grey Cup Festival organizers are calling the event a success.

“We had pretty high expectations I think and it exceeded our expectations,” Craig Reynolds, co-chair for the Grey Cup Festival, said.

Reynolds said the game itself, which was held on Sunday evening, emulated exactly what the stadium was built for.

“We wanted it to be a social experience and we saw that. We saw thousands of people on the concourse,” he said. “We had tremendous turn out.”

Because of the weather conditions, Reynolds said the stadium may have appeared more empty than it really was as people were trying to warm up indoors.

“When you have a cold weather game like that, with some people not as invested in the score, they don’t spend as much time in their seats,” Reynolds said.

Reynolds said it was a sold out game. He said there was some reselling online, and tickets may have appeared for sale after the holds for the Winnipeg Blue bombers and Toronto Argonauts were lifted. 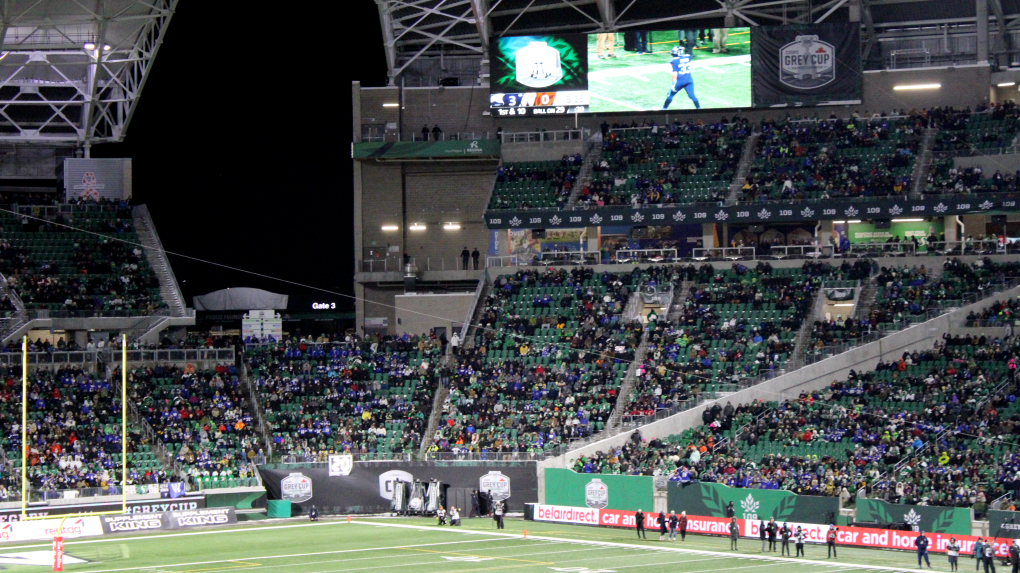 One corner of Mosaic Stadium is seen during first half action of Grey Cup 109 in Regina. (Brendan Ellis/CTV News)

“At half time, it looked almost fuller because I think people returned to their seats to watch the half time show. Any event is going to have some no-shows. When we looked at the no-show rate, it was similar to what we would see at other major events,” he said.

The festival portion of the event is also being considered a success.

Reynolds said it will take organizers a few months to tabulate final numbers for profits and attendance.

“It was an outstanding week from a revenue perspective,” Reynolds said.

“All the team party rooms were completely packed, we actually ran out of alcohol in certain cases and food in other cases, and had to restock. So I think attendance exceeded our expectations for sure and with attendance usually comes profitability.”

With the majority of events taking place under one roof at the REAL District, Reynolds said it was a great opportunity to show what Regina has to offer.

“I think locally everybody sort of understands what we have here, but I heard a lot from folks who travelled here just how amazing these facilities are,” he said.

“It speaks to our ability to host large scale events and I think nationally it was exposed this week.”

The Regina Police Service confirmed no arrests were made related to the Grey Cup Festival.

CFL fans from across the country started trickling out of Regina on Monday morning, with several arriving at the airport for early flights.

Many say they are leaving the city with fond memories.

“Regina put on a fantastic party for all of us this year. It was a lot colder than it has been, especially on Friday, but it seemed to be very well organized,” Brenda Josephs, a fan who 1as attended 10 prior Grey Cups, said.

“We did take in some of the team party rooms down at the convention centre there and it was amazing, just so well supported. In Riderville - I don’t think I’ve ever seen that much green in one spot in my life. I think overall it compares very favourably.”

Paul Woods travelled from Ontario to attend the festival and game.

He said the weekend “couldn’t have been better” considering the Argonauts’ win.

“It’s hard to compare because I haven’t always gone to the festival, but it was well organized. We had a lot of fun,” he said.

Paul Spiette, a Lions fan who travelled from British Columbia, has been to 18 Grey Cups.

He said having almost everything under one roof made the experience more enjoyable.

“My favourite part of the festival was getting together with a community of football fans,” he said.

“[This year] it was very welcoming, very well attended. All the rooms were really run smoothly. The system was really done very well, we got maps and directions from the get go so navigating ourselves around town was really good.”

“That was very positive,” he said.

“Another great Grey Cup - a fantastic game with a beautiful finish. I’m a secret Argos fan, although I’ve been following the Lions for a long time, but if I had a second choice of a team it would be the Argos, so I came away quite happy.”