REGINA -- A Regina man who died from complications related to COVID-19 last week is being remembered as a dedicated father and grandfather.

Noble Gullacher, better known as “Butch,” died in a Regina hospital on Friday. He was 69 years old.

His wife, Kathleen, described Butch as a family man.

“He basically lived for the last few years for his grandchildren,” she said.

Butch and Kathleen had two sons and three grandchildren. For the past few years, Kathleen said their grandchildren came over every weekend for a sleepover.

“We loved to spend time with them,” she said. “We’ve been very close with them.”

Butch was an avid Roughrider fan, purchasing season tickets for the past several years. He loved the Montreal Canadiens, sports cars and trap shooting. 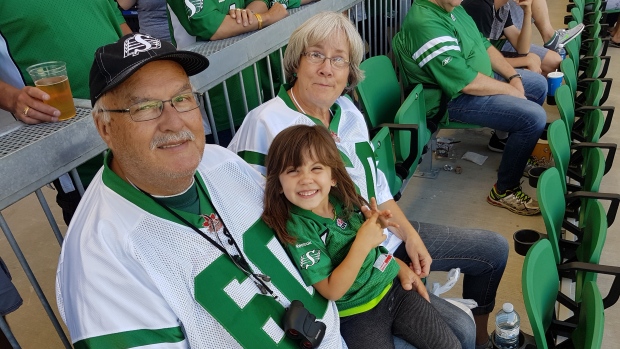 Butch Gullacher with his granddaughter and wife at a Roughrider game (Supplied: Kathleen Gullacher)

Butch started feeling sick in late March. As he got progressively worse, he visited his doctor and thought he was getting pneumonia. By the next day, Kathleen said he couldn’t get down the stairs in their home.

Butch was sitting in front of Kathleen, but she said she could tell he wasn’t really seeing her. She called an ambulance to take him to the hospital.

“That’s probably the last time that I saw him,” she said.

Kathleen wasn’t able to visit him in the hospital. Butch went into the ICU on March 21, where he stayed on a ventilator until his death on April 10.

Kathleen said her late husband had underlying health conditions. He was diabetic and was waiting for a kidney transplant.

“He was not in good shape going in and he never really recovered,” she said.

Kathleen spoke with doctors and nurses at the hospital daily. There were days when his breathing improved, but he remained on a ventilator.

“He was struggling to get better but it just wasn’t working,” Kathleen said.

She was able to visit him in hospital one more time before he died.

As for how Butch got the virus, Kathleen says she believes it was a result of community transmission. The couple hadn’t travelled anywhere in months, and friends of theirs who returned from Mexico in February tested negative for COVID-19. Nobody else in their family had travelled.

Kathleen’s advice for others? Stay home.

“The (physical) distancing thing, be really, really careful,” she said.

She’s only been out of her house once since the public health measures came into place.

The couple would have been married for 45 years in June, and Butch would have turned 70 in October. Kathleen says she’s not planning a funeral right now, but they may hold a party on her husband’s birthday when her family can actually get together.

“Nobody knows what’s going to happen in the next few months,” she said. “We’ll just live in the moment.”

As of April 12, four people have died from COVID-19 complications in Saskatchewan.