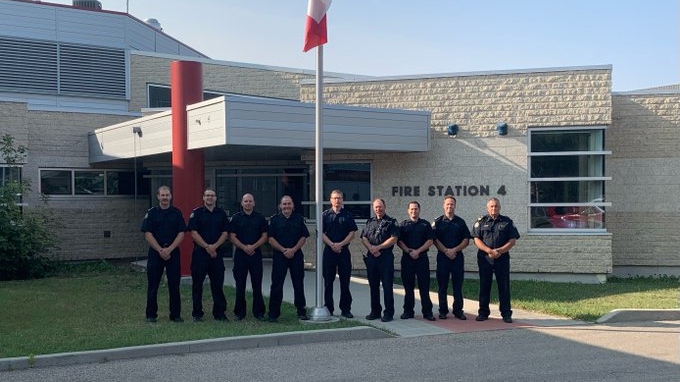 The event is not celebrated on a set date, but rather on the second Sunday of Sept.

This year’s memorial coincided with the 21st anniversary of the 9/11 terrorist attacks in the United States.

According to the 9/11 commission, 343 firefighters lost their lives on the day of the attacks, making it the single most deadly incident for the Fire Department of New York (FDNY).

The firefighters lost that day were memorialized in the messages from Saskatchewan’s various emergency services.

The Regina Fire and Protective Services (RFPS) lowered all station flags to half mast and observed a moment of silence in remembrance for those lost.

To Commemorate #FirefightersNationalMemorialDay and the anniversary of the 9/11 tragedy, flags at all fire stations have been lowered and a moment of silence observed to honour those who have made the ultimate sacrifice to save others and protect their communities #NeverForget911 pic.twitter.com/k7C7O1aOdp

The Saskatoon Fire Department (SFD) also commemorated the event with flags flying at half mast. The Saskatoon Firefighters Union IAFF 80 also plans to observe the memorial with a private ceremony Sunday evening, according to a news release from the City of Saskatoon.

Each year, the second Sunday in September is proclaimed to be Firefighters’ National Memorial Day. Today, we remember and pay tribute to the firefighters who have given their lives through the selfless fulfillment of their duties. #FirefightersNationalMemorialDay pic.twitter.com/6u6rF1rdPy

The Yorkton Professional Firefighters Association Local 1527 also released a memorial message, in remembrance for those lost during 9/11 in New York City.

Remembering today and always the many lives lost that day. pic.twitter.com/bS1YpA1o84

The Ministry of Public Safety Canada released a statement Sunday, thanking emergency responders for their service and underscoring the importance of the annual memorial.

“Every day, Canadian firefighters bring remarkable expertise, passion, courage, and commitment to a dangerous, but vital job – one that all Canadians rely on,” Minister of Public Safety Canada Bill Blair said in the statement.

“On behalf of the Government of Canada, and a grateful nation, I offer Canada’s firefighters my deepest thanks.”

Russia freed WNBA star Brittney Griner on Thursday in a dramatic prisoner exchange, as the U.S. released notorious Russian arms dealer Viktor Bout but failed to win freedom for a Canadian-born U.S. citizen, Paul Whelan, who has been jailed for nearly four years.

Canadian tourists may not be able to claim trip cancellations to Jamaica amid violence on island, travel expert warns

Despite Jamaica’s prime minister recently declaring a widespread state of emergency following a surge in gang violence and murder on the island, a travel expert warns that Canadian travellers may not be granted cancellation claims for travel insurance policies.

Gas prices down across Canada, likely to last a few weeks leading up to holidays

Drivers hoping for cheaper gas can fill up after the price at the pump across Canada dropped today to 143 cents.