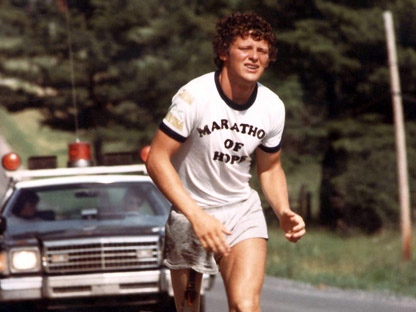 Marathon of Hope runner Terry Fox, shown in this undated photo, had his dream of running across the country cut short near Thunder Bay, Ont., when he learned that cancer had spread to his lungs. (CP PHOTO)

Thirty-eight years after his brother Terry ran across Canada, Fred Fox is keeping that legacy alive by continuing to raise cancer awareness.

“The Terry Fox Run is a family event,” Fox said. “Everybody’s been touched by cancer.”

Fox has been touring through schools across Canada, talking to kids about the importance of cancer awareness.

He put an emphasis on making regular doctors visits, and said that early diagnosis is important.

“We lost our dad two years ago to lung cancer,” Fox said. “Who knows if he’d gotten to the doctor a little sooner things could be different today.”

When Terry Fox was diagnosis in 1977 at the age of 18, there was not much awareness for the cause or for those fighting against it. Fox explained that his brothers motive behind the Marathon Of Hope was not only to raise money for cancer research, but to bring awareness to what people with cancer were going through.

“Over the last 40 years since Terry’s run it’s talked about more,” Fox said. “ People have become more willing to go see the doctor early, and as a male it’s not always easy to go to the doctor when you think you should.”

He said it’s important to remember Terry’s cause, and those who lost the battle with cancer.

“Anything is possible if you try,” Fox said. “Terry was just an average ordinary kid, and he believed that if you work hard at it you can accomplish anything you want.”