Here's how many vaccinations Sask. is targeting for a return to normal

REGINA -- While Saskatchewan remains in the midst of a severe third wave of the COVID-19 pandemic, there is hope that a return to normal is in sight as the province continues to make progress on its vaccination program.

Saskatchewan is set to make vaccines available to anyone 40-and-over starting on Friday.

Modelling from the federal government points to 75 per cent of the population having a first dose and 20 per cent with a second dose before restrictions can start to be eased.

"We have to be more ambitious than 75 per cent," Dr. Saqib Shahab said during Tuesday’s provincial COVID-19 update. "I would say all of us should consider getting vaccinated, that is the only way we will protect ourselves."

Dr. Cory Neudorf, an epidemiology and community health professor from the University of Saskatchewan, agrees with Dr. Shahab and said the rise of variants in the province is going to make easing restrictions more difficult.

"Probably over 85 per cent is likely going to be needed now to reach that level of herd immunity that we want," he said.

Currently, the South Central, Central East and Northeast zones have the highest percentage of their population immunized at 33 per cent, while all regions outside of the Far North are sitting at about 30 per cent immunized. 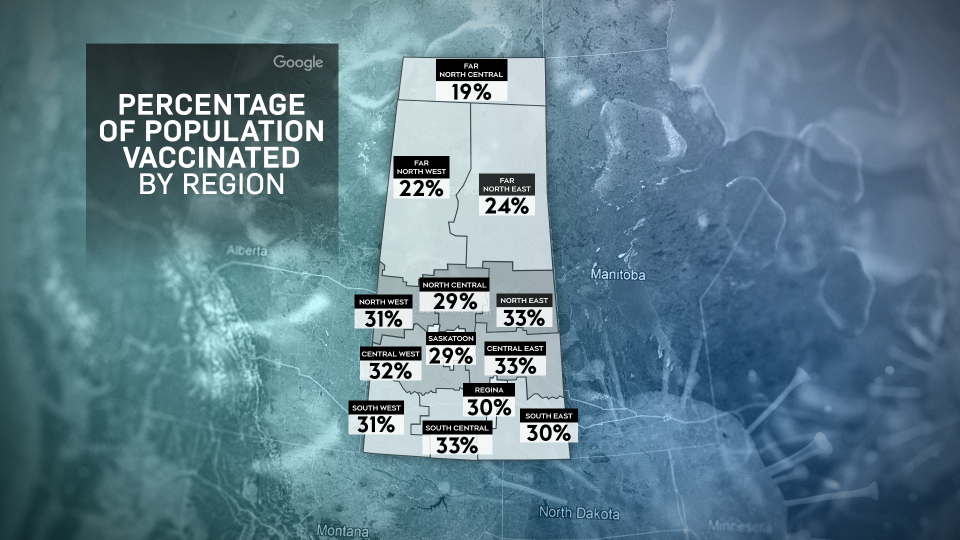 Saskatchewan has seen high vaccine uptake in the older age groups with over 80 per cent of residents 70 and older having at least one dose. Much of the younger population hasn’t had access to shots yet. 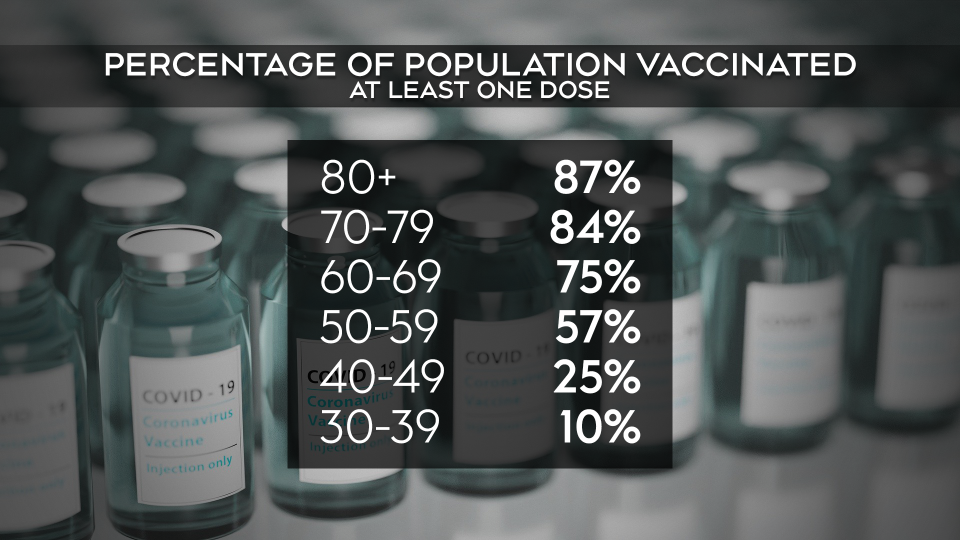 Dr. Neudorf said even as more people get vaccinated, the province can’t look at easing restrictions until case numbers and hospitalizations start decreasing.

"Until we get coverage rates in those young groups up to those high levels, we’re going to continue to see growth in cases, hospitalizations and ICU visits," he said.

Dr. Neudorf added stronger public health measures over the next few weeks would allow the vaccination program to get in front of the variant spread and the vaccines to take effect.

"By mid-to-late June, people will have had a chance to immunized and those people who have been immunized it will have a chance to have taken effect, that’s when we’ll really see cases plummet, but the real issue is what happens between now and then," he said.

The provincial government has been hesitant to enact stricter measures outside of Regina. Premier Scott Moe said residents need to do what they can to get case numbers lower over the next few weeks as more people become eligible for vaccination.

"You could lose so much if you contract one of these variants or if you pass it along to a friend or family member," Moe said.

Another concern is children aren’t eligible for the vaccines and some restrictions may need to stay in place until they’re able to get shots.

"We know that they’re not major transmitters right now, but we do know that even high school aged children behave the same as adults when it comes to transmission, so we will need to get at least that high school population immunized as well," said Dr. Neudorf.

Hitting the herd immunity numbers won’t mean the pandemic is over, however, as Dr. Neudorf said people will still need to be cautious.

"We’ll be watching for new reemergences and having to get on top of clusters that occur, reintroductions from other countries and potentially new variants for a while," he said.

The province’s vaccination program will receive a boost next week as shipments of Pfizer doses are expected to double to 63,000. Saskatchewan is also expecting its first batch of Johnson and Johnson doses this week.