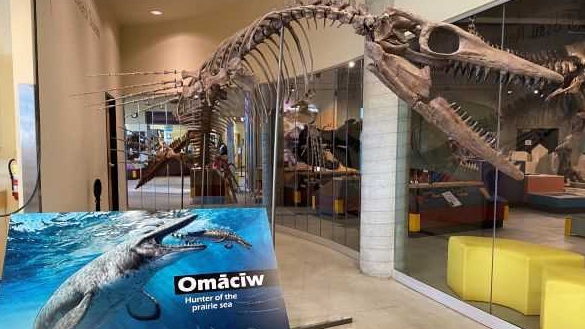 The T. Rex Discovery Centre (TRDC) in Eastend, Sask. has put the final touches on a new Tylosaur exhibit, which also includes a new display panel.

The Tylosaurus specimen, which was a predatory marine reptile related to modern lizards and snakes, was discovered in the hills around Lake Diefenbaker near Sask. Landing Provincial Park., according to a release from the Ministry of Parks, Culture and Sport.

The TRDC’s discovery is around 10 metres in length and was found with the skeletal remains of a smaller mosasaur in its stomach.

Tylosaurs, a species of mosasaur, lived 72 million years ago in an inland sea that covered most of the province at the time.

The TRDC is also the home of Scotty, the world’s largest T. rex. and has several activities in store for the summer.