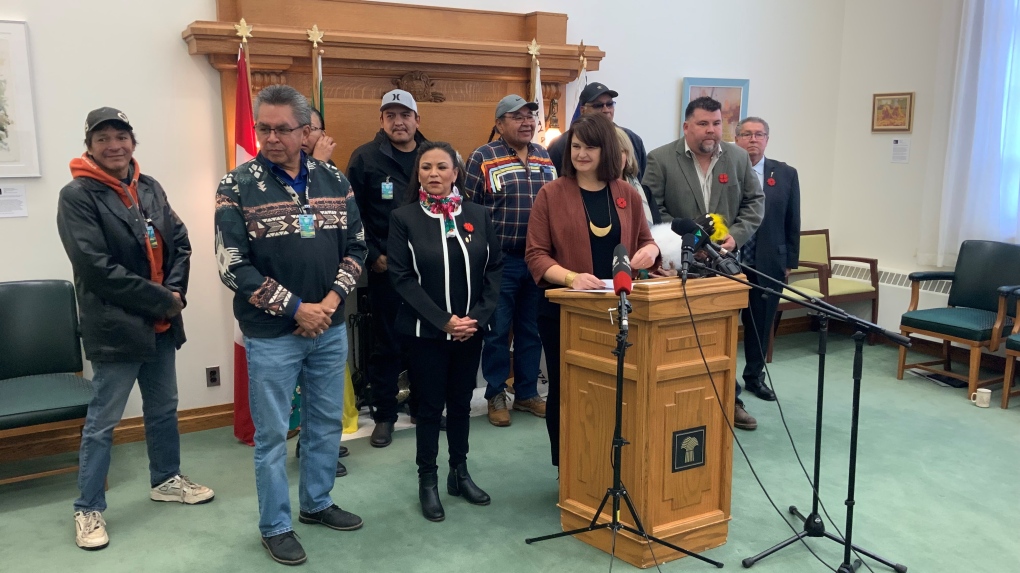 Sask. NDP Leader Carla Beck, along with MLA Betty Nippi-Albright, MLA Doyle Vermette and Indigenous leaders from across Saskatchewan at the announcement of the Meaningful Duty to Consult Act. (Wayne Mantyka/CTV News)

The Saskatchewan NDP unveiled the ‘Meaningful Duty to Consult Act’ on Monday. The legislation outlines improvements to the duty to consult framework for First Nations and Metis communities on issues that affect treaty and Indigenous rights.

Indigenous leaders from the Fishing Lake, Kawacatoose, Cote First Nations as well as the Anishinabe Nation Treaty Authority were present for the unveiling of the legislation on Nov. 7.

“You know the government is unresponsive when Indigenous leaders have to brave an Alberta clipper just to get a word in at the legislature.”

Under the current framework in Saskatchewan, the provincial government is solely responsible to determine if a project triggers the duty to consult Indigenous communities.

The proposed act would codify the government’s obligations on consultation and add consistency as well as language, clarifying when the policy would be triggered.

“The Meaningful Duty to Consult Act will put us on the path to meaningful engagement and I urge the Sask. Party MLAs to get on board and support it.”

“We think the engagement process is very valuable to all citizens in the province [and we] look forward to the results of that engagement.”

Nippi-Albright argued the government was rushing the consultation process with Indigenous communities.

“Rather than rushed consultations to refresh the outdated policy, why won’t the Sask. Party get to work and engage in meaningful consultations and get the duty to consult right?” she said during Question Period.

“The broken consultation this government has started will only result in another broken duty to consult policy that won’t have any teeth. Policy isn’t enforceable, legislation is."

According to Minister McMorris, government consultations on the duty to consult framework have been ongoing since July of 2022. The process was recently extended into November.

The official opposition also argued that the Saskatchewan First Act was developed without consultation.

“The Sask. Party plowed ahead with their white paper and their legislation, without any consultation with First Nations and Metis people,” Nippi-Albright said.

“Indigenous people have treaty rights that are affected by natural resource development … and they have been completely excluded from this report that will impact those rights and interests.”

Minister of Justice and Attorney General, Bronwyn Eyre, argued the act would not infringe on the rights of Indigenous peoples in Saskatchewan.

“Nothing in the Saskatchewan First Act, which defends our exclusive jurisdiction over natural resources, diminishes or detracts in any way from First Nations treaty rights which are enshrined in the constitution,” she said during Question Period.

“Our goal is to unlock Saskatchewan’s economic potential for everyone in the province, including First Nations.That is where we stand.”

Prime Minister Justin Trudeau will be presenting the federal government's offer for billions in new health-care funding to the provinces and territories at a highly anticipated meeting in Ottawa today.

One-third of households say they're financially worse off compared to year ago: poll

A former London police officer was sentenced Tuesday to life in prison with a minimum term of 30 years for raping and sexually assaulting a dozen women over a 17-year period.

Canada’s yearslong shortage of veterinarians was exacerbated during the pandemic, as more people welcomed pets into their homes to add joy and companionship during lockdowns. Now, concerns around quickly accessing medical care for animals is more urgent than ever, says one vet.

Astronomers have discovered a rocky exoplanet about a few dozen light years away from Earth with conditions that could make it habitable.