REGINA -- Ten months into the pandemic and Saskatchewan is seeing its worst COVID-19 numbers to date.

"Think about every different metric or every different sort of light on the dashboard that could be going off right now, really every single one of them is showing that we’re in a crisis," Dr. Kyle Anderson, biomedical professor at the University of Saskatchewan, said.

Saskatchewan’s seven-day average for daily COVID-19 has doubled over the past 13 days. The weekly average dropped to 152 on Dec. 30, but it has increased each day since, hitting an all-time high of 307.

The province has seen more than 300 cases per day for four straight days, which is the longest stretch of the pandemic.

"Our incidents is over 25 per 100,000 per day and a lot of jurisdictions mark that as sort of the critical point," Anderson said. "Above 25, things should be shutting down, you should be considering lockdowns when you reach that point." 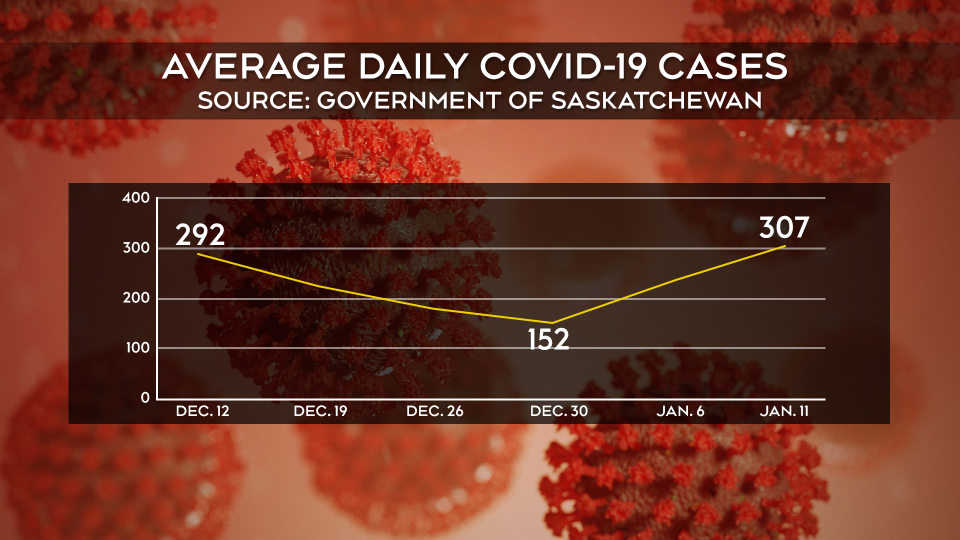 Saskatchewan also hit an all-time high in hospitalizations with 197 COVID-19 patients currently in hospital. Eight more people died from the virus on Monday, bringing the total to 44 since Jan. 1.

There were 412 new cases reported in the province on Monday, coming from 2,611 test performed, which is a test positivity rate of 15.78 per cent.

The weekly test positivity average is at 11.68 per cent.

"That means there are probably a lot of cases that we haven’t identified that are sort of just out there in the general public," Anderson said.

"Generally we would want [the test positivity] to be below five per cent to have a good trust that we’re getting most of the cases."

While other provinces went into lockdowns over the holiday season, Saskatchewan chose to limit household gatherings, but allowed restaurants, bars and stores to remain open.

Anderson said that doesn’t seem to have worked for the province.

"We don’t want to be second place, we want to try and get ahead of this and right now, it really does seem like we need stronger restrictions," he said.

Anderson added a key part of tightening restrictions would also be education to explain to people why it’s needed.

"We need to get more encouragement out there in the population, saying this isn’t going to be forever, this isn’t like a year ago when we said we’re going to lockdown and we have no idea when it’s going to end," he said.

Active case numbers in Regina and Saskatoon have remained steady at around 500 to 600 since reaching their peak in early December.

The North and Far North regions have seen their case numbers climb to dangerous levels in recent weeks, according to Anderson.

Currently 51 per cent of the province’s 3,735 active cases are in the six zones that make up those two regions.

"The North and Far North is in maximum crisis, that’s where they are going to overload their healthcare systems."

The COVID-19 vaccines continue to be the light at the end of the tunnel and Saskatchewan’s vaccination numbers are picking up after a slow start to the rollout.

Saskatchewan has averaged 670 vaccinations per day over the past week, pushing the total number of vaccines administered to 8,948 so far.

The Saskatchewan Union of Nurses (SUN) is concerned the pace remains too slow.

"They can’t get moving forward to get the amount of people vaccinated that we need to have vaccinated," SUN President Tracy Zambory said. "A great day in Saskatchewan would be if the vaccination fridge was empty because we were able to vaccinate everybody."

The province said on Monday it has received guidance from Pfizer that will allow them to begin using that vaccine in long-term and personal care homes, as well as clinic locations, starting immediately in Prince Albert.