Saskatchewan to send patients to Alberta for privatized surgery; won't pay for travel

Saskatchewan to send patients to Alberta for privatized surgery; won't pay for travel 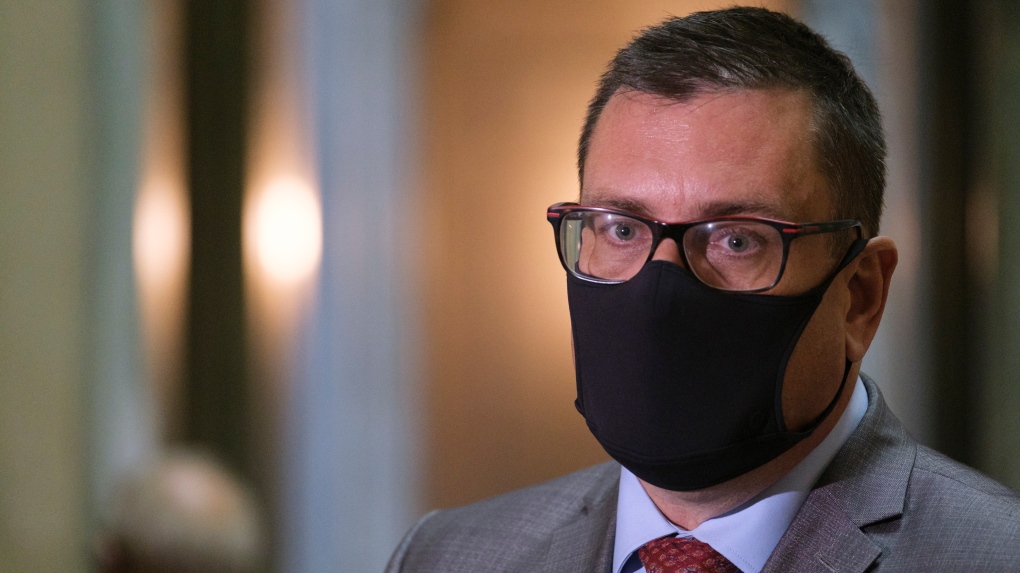 Paul Merriman, minister of health, speaks to media at the Legislative Building in Regina on October 27, 2021. Saskatchewan says it will be sending people to Alberta to get privatized surgeries, but the cost of travel won't be covered by the government. Health Minister Paul Merriman says the Saskatchewan Party government will begin paying a Calgary clinic this fall to perform 20 knee and hip surgeries a month for those on Saskatchewan's surgical waitlist. THE CANADIAN PRESS/Michael Bell

Saskatchewan plans to send people to Alberta to get privatized surgeries, but the cost of travel won't be covered by the government.

Health Minister Paul Merriman said the Saskatchewan Party government will begin paying a Calgary clinic this fall to perform 20 knee and hip surgeries a month for those on the province's surgical wait list.

"If somebody does have the option to go to Calgary, they will incur the travel expenses back and forth, but they would have their surgery done considerably faster," Merriman said.

"If somebody has the financial means, they can do that and that opens up another spot within the public system."

Colleen Flood, University of Ottawa research chair in health law and policy, said the move would affect patients in lower socioeconomic circumstances who may find it more difficult to pay the cost of travel and, therefore, lose out on access to timely care

"That really is an additional user charge that's being added onto the patient, and that's in contravention of the Canada Health Act," Flood said.

"If the Saskatchewan government is planning on sending patients abroad, or to other jurisdictions, they need to make sure there's some assistance and compensation for the travel costs that they may incur."

NDP Opposition Leader Carla Beck criticized the delivery of out-of-province care, saying it would allow people to jump the line, which goes against the principles of the Canadian health-care system.

The Ministry of Health said there were more than 35,000 people waiting for a surgery as of March 31 with more than 8,000 patients waiting for hip or knee replacement surgeries alone.

Sending some patients to Calgary is part of Saskatchewan's aggressive plan to have the shortest surgical wait list in the country, Merriman said.

The province is also looking to open two private clinics within its public health system, with hopes that a Regina clinic will perform more than 3,000 orthopedic surgeries annually. The surgeries will be privately delivered, but publicly funded.

Merriman pitched the plan as providing choices to patients. When someone is being booked for a knee or hip surgery, they will have the choice to either access care in a private clinic, through the public system or travel to Calgary.

"It's not a political decision," Merriman said. "It's a clinical decision on where the specialist sees them in the queue."

Last week, Ontario Premier Doug Ford said his Progressive Conservative government would "get creative" when looking at ways to deliver surgeries as it deals with a staffing crisis in hospitals that worsened during the COVID-19 pandemic.

Like Saskatchewan, provinces throughout Canada have health-care systems that are partially privatized, including long-term care homes, family doctors, MRI tests and diagnostics.

In Saskatchewan, privately delivered surgeries accounted for 15 per cent of all surgeries performed in 2019-20, the Ministry of Health said.

Flood cautioned that opening the door to private clinics could place more pressure on politicians to privatize other services.

"The risk with these kinds of things is that once they're in place inside a public health-care system, they don't just sit there passively working away and they're all happy clams," Flood said. "They're going to want to make more money."

She said transparency is important and provincial governments need to remain clear "this is all within the public Medicare system" and will be "keeping their eyes very firmly fixed on the performance of these clinics and making sure they deliver."

This report by The Canadian Press was first published Aug. 17, 2022.

Hurricane Ian made another landfall Friday, this time in South Carolina, after carving a swath of destruction across Florida. Ian hit Florida's Gulf Coast earlier this week as a powerful Category 4 hurricane with 150 mph (240 km/h) winds Wednesday, flooding homes and leaving nearly 2.7 million people without power.

Canada headed for 'severe' and 'inevitable' recession in 2023: economist

Canada is headed for a 'severe' and 'almost inevitable' recession in early 2023, according to the head of economics at Macquarie Group, which states Canada will face an approximately three per cent contraction in gross domestic product and a five per cent rise in its unemployment rate during the predicted recession.

Ceremonies, marches and other gatherings are taking place across the country Friday as communities mark the National Day of Truth and Reconciliation. The federal statutory holiday was established last year to remember children who died while being forced to attend residential schools, as well as those who survived, and the families and communities still affected by lasting trauma.

Newly appointed president of the Canadian Medical Association, Dr. Alika Lafontaine shares what the organization plans to do in helping save the country’s collapsing health-care system.

He thought of the perfect place to propose. Hurricane Ian threatened his plans

A Florida man who had a feeling that the site of his first date would soon be flooded by Hurricane Ian, along Lake Eola in Orlando, rushed his partner out to the spot to ask her hand in marriage.

Canada announced today it is imposing new sanctions on Russia in retaliation for its 'unprovoked and unjustifiable' invasion of Ukraine.

On this National Day of Truth and Reconciliation, a recent investigation into the death of a 32-year-old Indigenous man is a stark reminder of the ongoing struggle for justice that continues to elude the Ojibways of Onigaming First Nations.