REGINA -- An SJHL goalie is returning to the ice for the SJMJHL Showcase in Regina following a serious concussion.

Berk Berkeliev took a hit that caused hit head to hit the ice. He was knocked out.

The opposing player, Greg Mulhall, who has since been released from the league was given a 25 game suspension for the illegal hit.

“I don't remember too much, I remember coming out to play the puck,” Berkliev, Melville Millionaires goaltender said.

He lost his two front teeth, received stitches in his lip, repairs to the back of his head and a concussion.

“He came into the room, and he didn't know where he was. He was bleeding everywhere, we were all super concerned and stuff but we didn't even know what was wrong with him,” Ryan Butler, his former teammate said.

“That was the part that I was really most worried about. Because other parts of the body heal but the brain is, like they say you only get one brain,” Berkliev said.

The 19 year-old rehabbed in Calgary, and didn't step on the ice for almost two months. He said for a while he was unsure if he would play again. 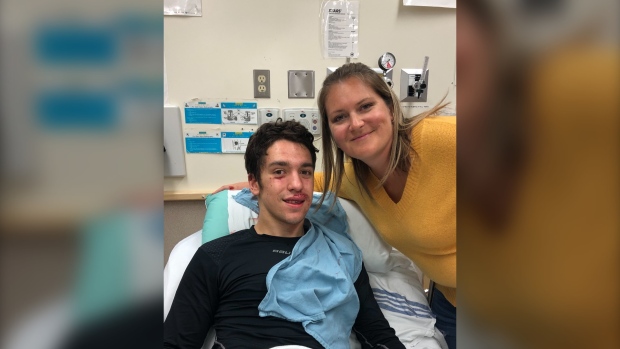 Not only is Berkliev playing hockey again with the Melville Millionaires, he's been asked to skate with the best players from the Prairies and helped team Kunitz to a 1-0 shutout Tuesday.

“His perseverance throughout the whole year has been great. He’s been great with the Millionaires and he was great here,” Team Kunitz coach Brayden Klimosko said.

Berkliev said he’s excited to be among the best players in the league.