REGINA -- Regina police are investigating after alleged incidents of vandalism to fuel tanker trucks entering and leaving the Co-op Refinery earlier this week. 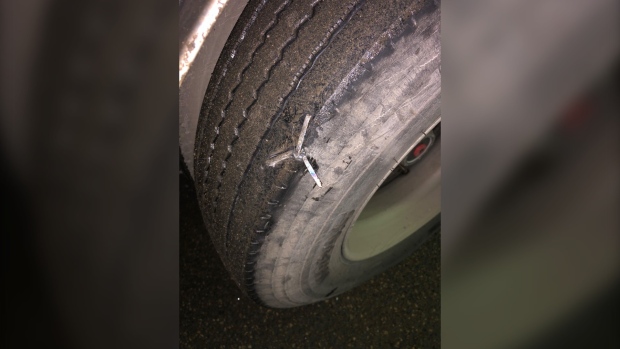 Heibein Trucking says a company driver discovered a welding spike in his tire. The employee was leaving the McDonald Street terminal at the refinery on Dec. 30 when he realized his tire was going flat.

Unifor insists this is not a tactic being used by the union.

“I don't know where it came from, but to me, people aren't going to put their jobs on the line vandalizing trucks. The truckers are in the middle of this, there's no reason for us to do any of that,” Unnifor Local 594 president Kevin Bittman said.

The owner of the trucking company is still fearful for the safety of his employees.

“One was a steering tire so if a steering tire comes off a rim out of nowhere, it will automatically pull you that way, you could go in the ditch or roll or spill the fuel tankers, there's about 58,000 litres of gas on that particular truck,” Chad Heibein, owner of Heibein Trucking said.

The fuel haulers say they are frustrated with being stopped at the picket lines for a maximum of ten minutes when trying to enter and exit the refinery.

Last week’s court ruling stated Unifor could only stop trucking entering the refinery for up to ten minutes.

Unifor says their interpretation of the court ruling differs from the truckers.

"We're interpreting that we have ten minutes to communicate our message to them, so we're using the ten minutes," Bittman said.