REGINA -- One new COVID-19 case has been reported in Saskatchewan, according to a release from the province on Tuesday.

The newest case, confirmed in the Regina area, brings the provincial total to 366. Seventy cases are considered active. 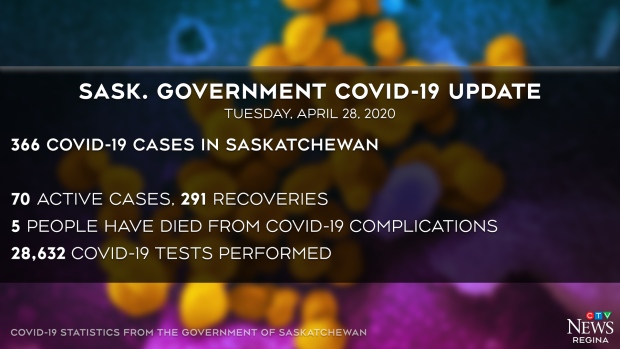 Three more people have also recovered from the virus, adding to a total 291 recoveries.

There are 38 cases that have been confirmed in healthcare employees.

Saskatoon continues to see the most confirmed cases with 150. There are 75 cases in Regina, 69 in the north, 15 from the south, 11 in the central region and 46 in the far north.

A total of 51 per cent of cases are in men while 49 per cent are in women.

To date, five deaths have been reported due to COVID-19 in Sask.

The province has performed 28,632 tests to date.