REGINA -- A fifth person has died in Saskatchewan from COVID-19 complications, the province said in a news release Monday.

La Loche’s mayor has identified the man to CTV News as community elder Joseph Pierre Sylvestre. He was 83 years old.

“Our thoughts and our deepest condolences are with the family and with the friends at this difficult time,” Premier Scott Moe said while speaking at the province’s daily update on Monday.

The province also announced 12 new cases on Monday, bringing the provincial total to 365. Eleven of the 12 cases are in the far north region. The other is in the north.

There were no new recoveries for the second straight day in Saskatchewan. Of the 365 cases, 72 are considered active. There have been 288 recoveries to date. 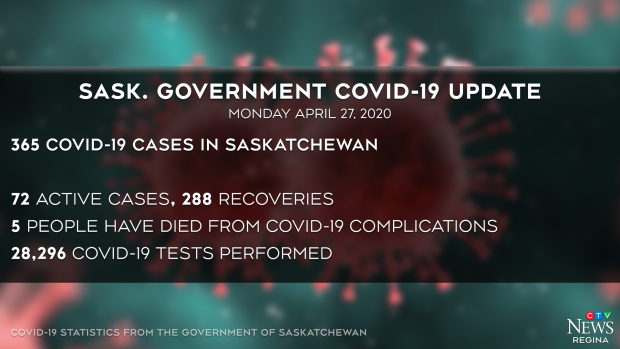 This is the highest number of new cases announced in Saskatchewan since April 5, when the Ministry of Health reported 18 new cases.

There are currently seven people in hospital in the province, including two in the ICU.

The province says 29 of the cases in the far north are in La Loche. Those cases are connected to an outbreak at an oilsands camp in northern Alberta.

More than half of Saskatchewan’s active cases are in the north or the far north.

“This again shows how quickly COVID can transmit,” Dr. Saqib Shahab said at the update. “When there’s a cluster or outbreak, it’s a challenging environment.”

Moe said a GeneExpert testing machine will be operational in La Loche by May 1. The community will have both mobile and in-home testing available.

“We continue to look at how we can help patients who are positive or suspected to have COVID-19,” Zayed said.

Zayed added the community is performing around 30 tests each day and speaking to an average of 70 people a day through contact tracing.

A vast majority of the cases are connected to travel to northern Alberta. Anyone returning from the Fort McMurray area is now required to self-isolate for 14 days.

Zayed also said there are two cases in a long-term care home. Other residents were tested negative for the virus.

There are also two health-care workers in the community who tested positive for COVID-19. They are both self-isolating.

Last week, Shahab said people can create “virtual households” with one or two other groups, as long as those groups stay consistent and under 10 people.

“We need to be very cautious, if we do that, it’s the same one or two families that we are connected with and not random two or three people,” he said.

Moe said he was “very concerned” about large events he’d heard about in the community this past weekend.

“I find that deeply disappointing on a number of levels,” he said.

Moe says the province’s success in flattening the curve is a direct result of people’s willingness to follow the public health order.

“I would hate to see that undermined in any way shape or form by individuals organizing large events, looking at ways to circumvent or getting around recommendations made by Dr. Shahab,” Moe said.

The premier discouraged people from organizing events or attending any events that will have more than 10 people in attendance.

Shahab said that people need to remember that things are not returning to how they were before for some time.

“It’s enjoying the outdoors in a new normal,” he said.

Moe said people need to be mindful of physical distancing and be aware of who they’ve had contact with in the past few weeks in case they test positive for the virus. He added that list should be shorter than 10 people.

“For us to continue with the collective success, we have to conduct ourselves with a very high degree of personal responsibility when it comes to physical distancing,” he said.

No plans to return to legislature: Moe

The premier says his government hasn’t discussed the possibility of returning to the legislature in the midst of the pandemic.

“All of our resources at this point in time have been focused on the health-care delivery of the COVID crisis,” he said.

Moe added the legislature would likely only return if the government needed to pass new legislation to help fight the pandemic.

The Health Ministry says there are 139 cases related to travel, 149 from close contacts or mass gatherings, 35 with no known exposure and 42 under investigation.

Thirty-eight of the cases are in health-care workers, although the province says not all of those cases are related to working in the health-care field.

The province has performed 28,296 COVID-19 tests to date and remains ahead of the national testing average.

There have been five deaths related to COVID-19 in Saskatchewan.

The Ministry of Health says it’s had a lot of questions about the time and process involved with reporting COVID-19-related deaths. The ministry says it needs to record and report cases and deaths in a uniformed way so “all jurisdictions have a consistent approach to reporting and that the evolving science can draw from this information.”

Any deaths need to be confirmed by the medical health officer to make sure it meets certain criteria to be recorded by epidemiological reporting tools before it can be reported to the public, the province said in a news release.

On Friday, the province said it was restricting all non-essential travel to the far north.

Residents are also reminded to keep practicing proper physical distancing and good hygiene to prevent the spread of the virus.