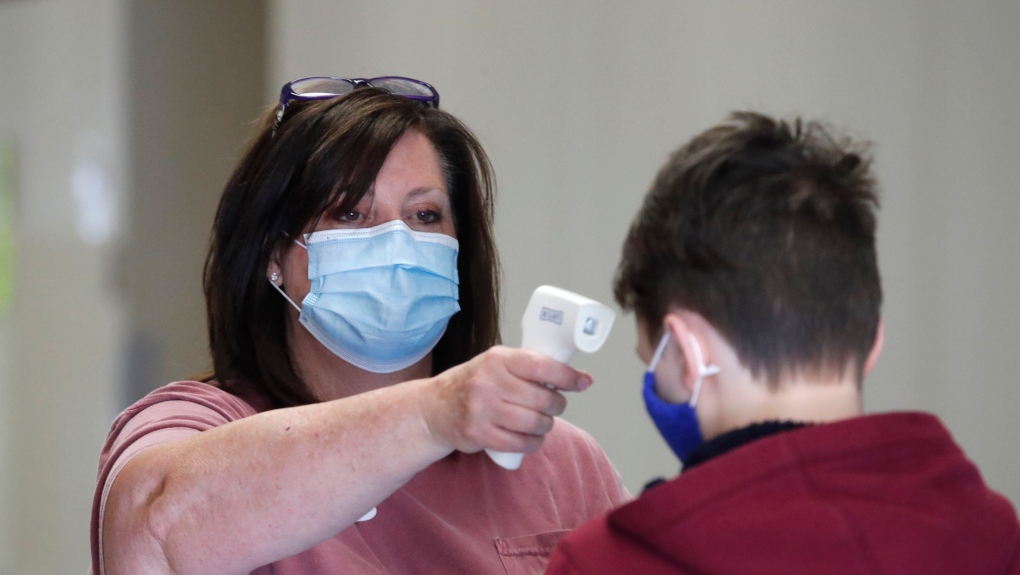 Amid concerns of the spread of COVID-19, science teacher Ann Darby, left, uses a thermometer to check a student's temperature before they entered a summer STEM camp at Wylie High School Tuesday, July 14, 2020, in Wylie, Texas. (AP Photo/LM Otero)

REGINA -- The Saskatchewan government is reporting eight new cases of COVID-19 as of Sunday, bringing the total to 1,651 reported cases.

There is one new case in the north west region, three in the Saskatoon area, two in the central east zone, one in the Regina area and one in the south east region.

Forty-eight cases are considered active, the province said. There have been no new recoveries as of Sunday, but in total, 1,579 people have recovered.

One person is in hospital in intensive care in Saskatoon.

COVID-19 tests are now available to anyone who requests it and regardless of symptoms.

The province said a referral for testing can be made by contacting HealthLine 811 or through a doctor’s office if symptoms worsen.

Drive-through testing sites that do not require a referral will open Tuesday in Regina and Thursday in Saskatoon.

The drive-through station in Regina will be at the International Trade Centre at Evraz Place - Hall C, 1700 Elphinstone Street.

Saskatoon’s drive-through station will be at 3630 Thatcher Avenue.

A valid Saskatchewan Health Card will be required for each person getting tested.  A Canadian Armed Forces number or Interim Federal Health identification will also be accepted.

Masks will be required for the registration process.

The drive-through sites will be first come, first served. Wait-times are expected.

People must wait in their vehicles and there are no public washrooms available at these sites.