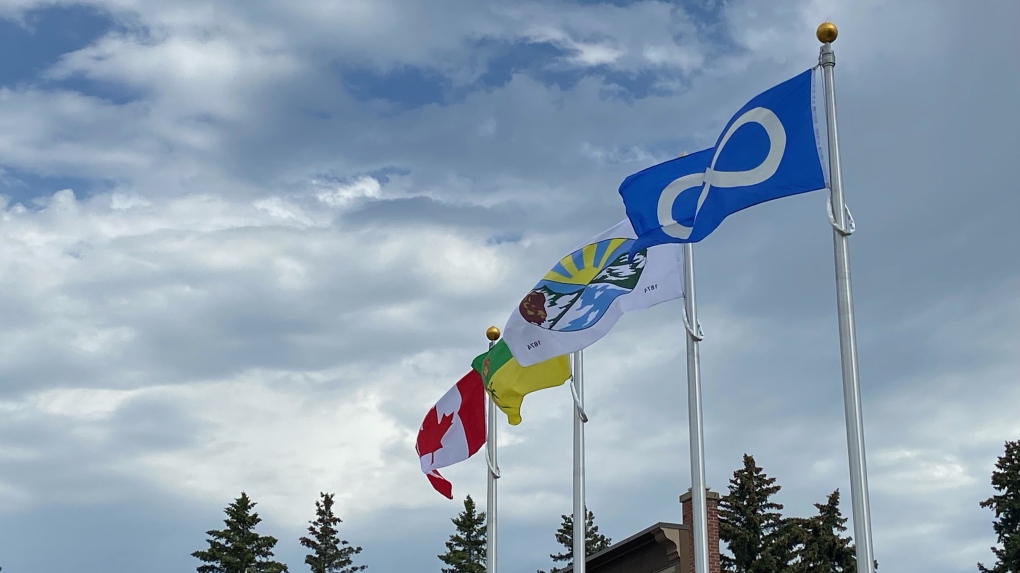 The Town of Indian Head raises flags in front of the town office to mark their commitment and partnership in reconciliation. (Donovan Maess/CTV News)
Indian Head, Sask. -

The town of Indian Head has shown its commitment to be a part of reconciliation by raising the Treaty Four and Metis Nation flags in front of its town office.

Both are now flying high alongside the flags of Canada and Saskatchewan.

“This has been a long time coming,” said Mayor Steven Cole. “This is an excellent opportunity to celebrate the Indigenous heritage in this area.”

“This is a momentous occasion,” said Marg Friesen, the region three representative for the Metis Nation of Saskatchewan. “It provides an opportunity to work together and understand one another. It brings people together in collaboration, in unity and harmony, so that we may live in peace.”

The idea to raise the flags was spearheaded by a group of local teens called the Change Makers. The aim of the group is to link young Indigenous and non-Indigenous people as they embark on the journey that is reconciliation together.

“People wanted to listen to us,” said Gracie Runns. “They were willing to make changes. It’s the first step and I’m really excited to see what else will happen.”

“As we’ve grown, we’ve seen a lot of pushback as well,” said Jaicilyn Thomson. “But today, the turnout was just amazing and that really motivates us because we know we have each other behind us as well.”

The town says having an initiative like this being led by the future leaders of a community will lead to greater change in the community.

“It’s going to create a better place for our kids to grow up,” said Meagan McEwen, the officer of community development for the Town of Indian Head. “It’s so encouraging to see how strong of a voice they are.”

“We want to mentor the young leaders of today,” Friesen said. “It’s promising to see young people have those leadership qualities. It is our job as community leaders to foster that and to empower youth to make a difference.”

“There is an issue with the name of the town,” said Sophie Bowden. “I would like to see more conversations about it.”

“Or even just finding an area in the town to set up a permanent tipi and honour the history of the First Nations people,” said Runns.

Friesen said reconciliation is something that must become a behaviour in society.

“History has divided our two worlds: Indigenous and non-Indigenous,” she said. “This is how we can come together.”