REGINA -- A boil water advisory on the Black Lake Denesuline First Nation that has been in place for more than seven years has been lifted, according to the Government of Canada.

The long-term drinking water advisory (LT-DWA) was lifted on January 23.

Nearly 200 homes and buildings in the northern First Nation such as the school, fire hall and band office now have clean drinking water from the local water treatment plant.

The advisory was put in place on the First Nation in April 2013, due to the water treatment plant nearing the end of its lifespan.

The Chief of Black Lake Denesuline First Nation said the water coming from the old water treatment plant was undrinkable.

"I remember a few years ago, it was so brown and I wouldn't even take a shower in it," Chief of Black Lake Denesuline First Nation, Archie Robillard said.

For years, residents on the First Nation relied on bottled water or using water from other sources.

"I remember I used to get a chunk of ice and thaw it out and we used that for drinking water," Robillard said. "It tastes a lot better, instead of going through that system."

The Federal Government said it invested $11 million into the water system in 2016.

"I can't provide you with an explanation that anyone would find acceptable. It is unacceptable that these things go on so long," Canada’s Minister of Indigenous Services, Marc Miller said. "This is the product of long-standing undercapitalization."

Even with the new water treatment plant bringing water to residents' homes, many people on the First Nation are nervous about the water because of the condition of the old plant.

"A lot of people are still using bottled water because they're immune to it," Robillard said. "I tried to explain to them that this water is way better than about seven or eight years ago."

There are six Saskatchewan First Nations currently under active LT-DWA. 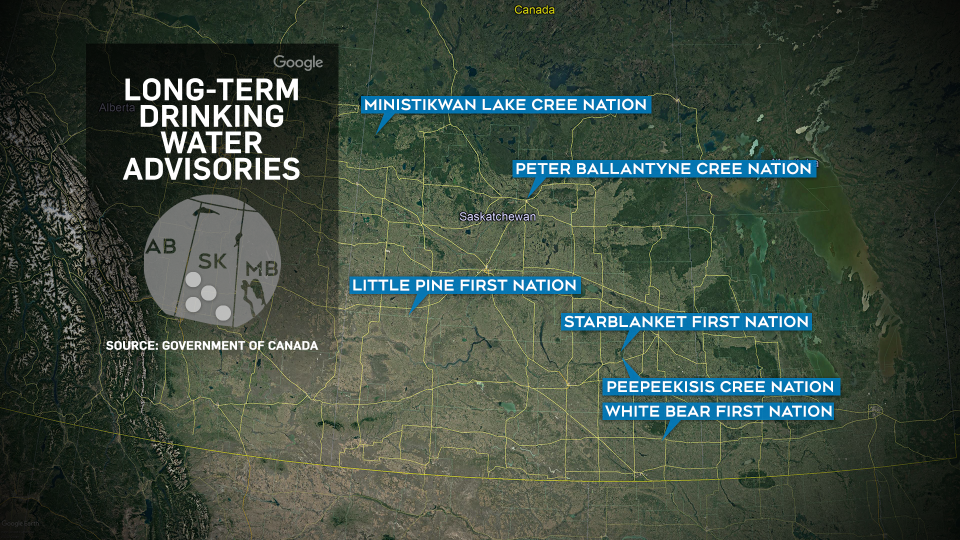 Miller said there are plans in place to get all of these water advisories lifted in the future.

In December, the federal government invested $1.5 billion to go towards accelerating work to lift the LT-DWA on Canadian First Nations.

"We have committed $1.5 billion to aggressive measures to ensure that we're investing in communities," Miller said. "Not only to make sure that those projects get built but that we accompany communities in their long-standing requests for increased operations and maintenance throughout the lifespan of the asset."

There are 39 First Nations across Canada with active water advisories.