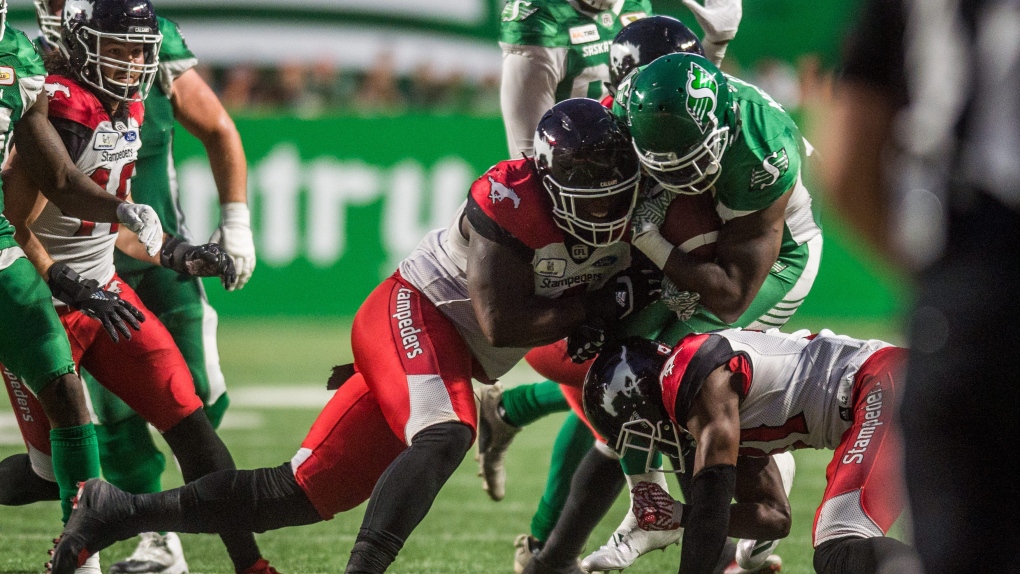 The Calgary Stampeders had enough things go right early to help bail them out late for their sixth straight win to begin the season.

Quarterback Bo Levi Mitchell and the Stampeders raced out to a 24-point lead in the first quarter on Saturday against the Roughriders and held on over three quarters for a 34-22 victory.

"Getting out to a 24-0 lead and then letting them do what they did in the second and third quarter is on us," Mitchell said after he threw for 187 yards and three touchdowns on 18-of-24 pass attempts.

"We can't let those things happen if we want to be a championship team. Hats off to them, they're a great team."

Mitchell connected with Marken Michel on a 40-yard touchdown pass and catch to break the ice and put Calgary up 7-0.

A Rene Paredes field goal and a 78-yard punt return for a touchdown from Terry Williams pushed the Calgary lead to 17-0 before the game was 10 minutes old.

After a second Saskatchewan (3-3) turnover, Mitchell hooked up with Eric Rogers on a 15-yard touchdown, and the route appeared to be on.

"We had a good start, no doubt," Calgary head coach Dave Dickenson said. "They had a couple of turnovers and we had a big punt return, but then we started making a lot of mistakes with our communication."

The Riders scratched their way back into it thanks to a pair of field goals from Brett Lauther and a 52-yard interception return for a touchdown from Tobi Antigha.

The Riders cut the deficit to 24-13 at halftime.

"We just had to find a way to battle through it," said Saskatchewan's Charleston Hughes, who had two sacks against his former team.

"It was only the first quarter and you have to keep chipping away at the lead and that's what we did. I'm proud of my teammates for doing that much and putting us in a position to come back and win this game."

Saskatchewan's momentum carried through to the second half. Lauther, who was 5 for 5 on field goal attempts, kicked two more three pointers and Saskatchewan trailed 24-19 with five minutes to go in the third quarter.

"We always expect a fight with Saskatchewan," said Calgary linebacker Alex Singleton. "That is what rivalries are all about. They're never going to quit, we had to buckle down and play four quarters."

Order was restored, however, when Mitchell marched the Stampeders and capped a drive with a 15-yard touchdown strike to DaVaris Daniels late in the third for 31-19 lead.

Lauther booted his fifth field goal of the game midway through the fourth quarter to make it 31-22, but that was as close as the home side would get.

Paredes' second field goal of the game gave Calgary a 34-22 lead to cap the scoring.

Calgary allowed more than 14 points in any game for the first time in 2018. The 1979 Edmonton Eskimos were the most recent team to record such a stingy start to a season.

Saskatchewan's Brandon Bridge threw for 147 yards on 19-of-29 pass attempts.

The two teams are scheduled to meet again in Regina in three weeks.

Saskatchewan will travel to Edmonton to take on the Eskimos next week, while Calgary will host the B.C. Lions.