Farmers will need 40 hours of training to drive semis starting next year: Province 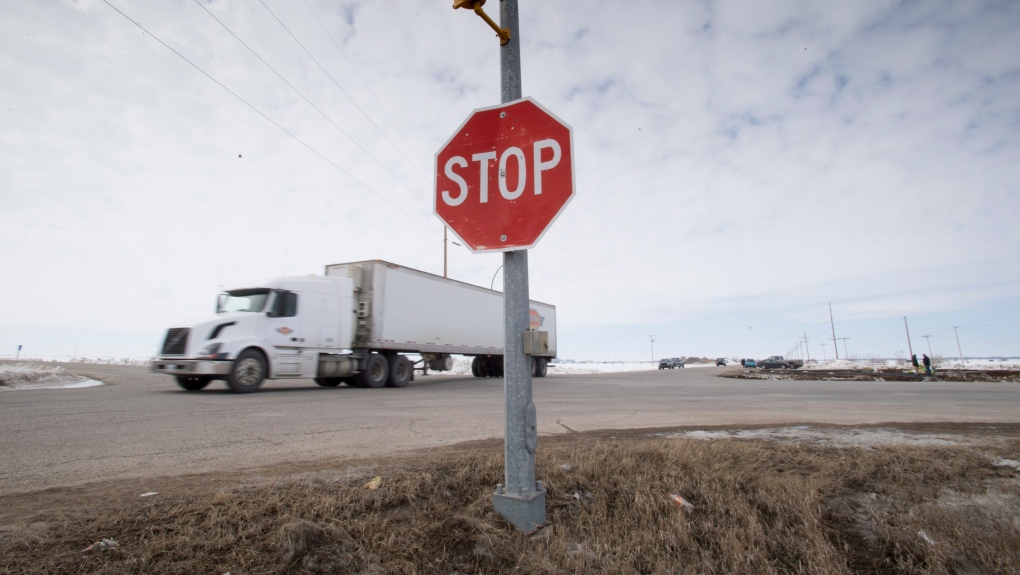 The stop sign on highway 335 is seen at the intersection of highway 35 near Tisdale, Sask., Tuesday, April, 10, 2018. This is the intersection where a bus carrying the Humboldt Broncos hockey team crashed into a truck en route to Nipawin for a game Friday night killing 15 and sending over a dozen more to the hospital. (THE CANADIAN PRESS/Jonathan Hayward)

Mandatory entry-level training of 121.5 hours for commercial truck drivers began on March 15, but farmers with an “F” endorsement on their licence were exempt. Those drivers can only travel within Saskatchewan.

Starting on March 1, 2020, drivers hoping to get an “F” endorsement will need to take 40 hours of mandatory commercial driver training. The province says farm drivers are only able to drive within a 100-kilometre radius of the vehicle’s registered address, and can only operate within the province of Saskatchewan.

There are currently 33 farmers using the "F" exemption, a government spokesperson said Wednesday.

“We wanted to take some more time to consult with the farm sector on the impacts mandatory training would have on their industry, recognizing that vehicles used in farming operations are – in most cases – not on the roads as much as commercial semis; they also tend to travel shorter distances, and through areas with lower traffic volumes,” Minister Responsible for SGI Joe Hargrave said in a news release.

The timeframe will allow farmers to get through this year's harvest before starting the new training, Hargrave added.

Todd Lewis, the President of the Agricultural Producer’s Association of Saskatchewan says it participated in government talks so these changes are not unexpected. He added that producers should be able to adapt to the new training with only a couple minor speedbumps.

"We realize the importance of safety training and most producers are interested in having good training and being safe,” said Lewis. The cost, there's going to be some logistics involved and where we can get trained, and all those kinds of issues, but those are things that will be worked out.”

The province also says a year later, on March 1, 2021, the “F” endorsement will be eliminated. Anyone operating a semi will need to get a Class 1 licence and take the full 121.5 hours of mandatory training.

Drivers who received their Class 1 licence prior to the implementation of mandatory training will be able to continue driving a semi.

Hargrave said the majority of farmers the government contacted supported the implementation of mandatory training.

“They know that our roads in Saskatchewan need to be safe,” he said.

According to the province, mandatory training programs across the Prairies will be aligned by 2021.

Alberta introduced mandatory entry-level training for all truck drivers on March 1. Manitoba will implement its training regulations on Sept. 1. Both provinces require 121.5 hours of training, the same as Saskatchewan.

The parents of Humboldt Broncos athletic therapist Dayna Brons, who was killed in the bus crash last year, signed a petition calling on the federal government to update national trucking regulations. The petition was started by Pattie Fair, a B.C. woman whose husband was killed in a crash with a semi-truck in 2017.

That petition closed on May 14.