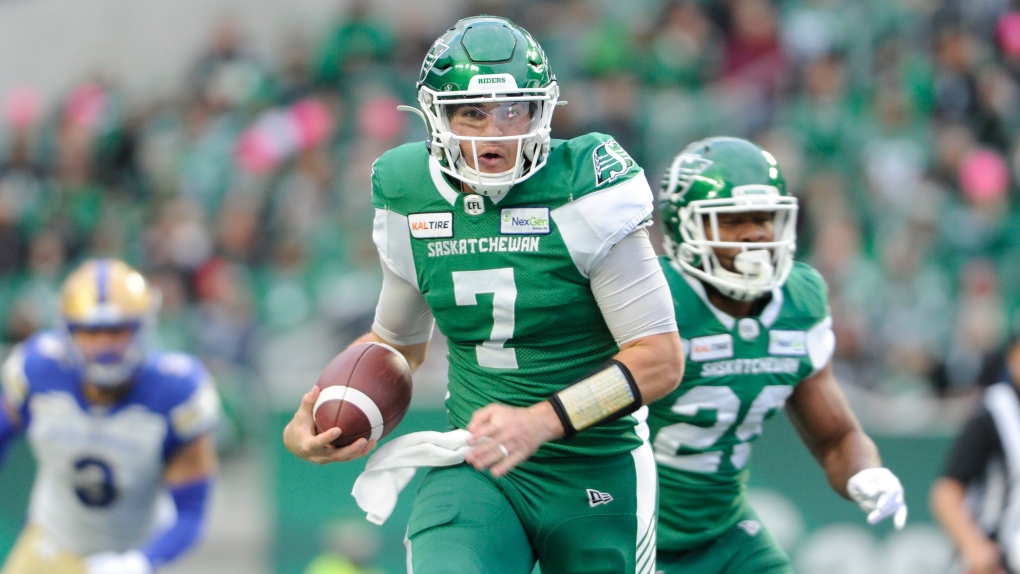 REGINA -- There are three things we know for sure about Sunday’s CFL West Final between the Saskatchewan Roughriders and Winnipeg Blue Bombers.

1. The weather will be incredibly balmy for the middle of November.

2. This battle royale is absolutely unpredictable.

3. The players in the green hats are nicer guys.

I honestly can’t recall a previous game that has this many unknowns.

This contest will be the ultimate reality TV, played live before us all, with nobody having a clue as to what will happen.

It will be right out of an Agatha Christie novel.

Feel sorry for the poor guy in Vegas who has to decide on a betting line for this West Final, he might as well draw numbers out of a hat.

The biggest unknown is obviously the health of Rider starting quarterback Cody Fajardo, who will play despite an injured oblique muscle.

Beyond that, we know nothing.

Cody himself doesn’t know how this will play out, he’s just hoping for the best.

Cody could throw the first pass, crumple down, and exit the game.

Cody could go the distance with velocity on the ball.

Will he make it to the end of the first quarter? Third Quarter?

It’s really soup to nuts as to what could happen here.

How much will Isaac Harker play, or Bryan Bennett?

Coach Craig said all three quarterbacks will see the field.

What does that mean?

Winnipeg QB Chris Streveler played the semi-final with a broken bone in his foot along with torn ankle ligaments.

Will freezing allow him to run like that again?

How will Zach Collaros play?

Will he throw beautiful long bombs or will he toss into double coverage?

Can the Riders stop the run?

Can the Riders ramble against the best run defense in the CFL?

Can the Riders handle Winnipeg’s physicality?

That enough of the cans.

We could go on and on here.

Bottom line, I wouldn’t buy a Pro-Line ticket for this game.

So, if you think you know what is going to happen on Sunday, then let’s go to the Arctic and I’ll sell you some ice.

Let’s just hope Professor Plum did it in the study with the candlestick so the Roughriders go to the Grey Cup.