Some Saskatchewan families are still dealing with travel disruptions caused by a service outage at WestJet over the weekend.

On Saturday, the airline tweeted it was aware of a “system-wide outage impacting operations.”

We are aware of a system-wide outage impacting operations and are actively working to restore service. We apologize for the inconvenience.

On Thursday, a statement from WestJet confirmed that since the weekend, more than 400 flights had been cancelled related to the service outage.

One of those was a flight from Kelowna, B.C. to Regina on Saturday, which Ariane Desrosiers and her family were scheduled to be on.

“We tried to rebook and ended up going back and forth between Kelowna and Penticton in a rental car trying to get on the best flight,” Desrosiers said.

“Eventually on Tuesday, we got on one from Kelowna to Calgary.”

The family had been put on a connecting flight from Calgary to Regina but due to delays, missed the connection.

They decided to rent a car and drive back to Saskatchewan.

“We eventually just drove home [Wednesday] morning and got home at 9:30 at night, which was 108 hours after we left for the airport on Saturday,” she said.

With every person Desrosiers saw face to face or on the phone, she said she was told they couldn’t help. She said the lack of communication was the most frustrating part.

“The several times I ended up talking to customer service, it took upwards of seven hours to get on the phone with them,” she said.

“We just couldn’t do it anymore - we had to get home. It had been so long and they weren’t rebooking us.” 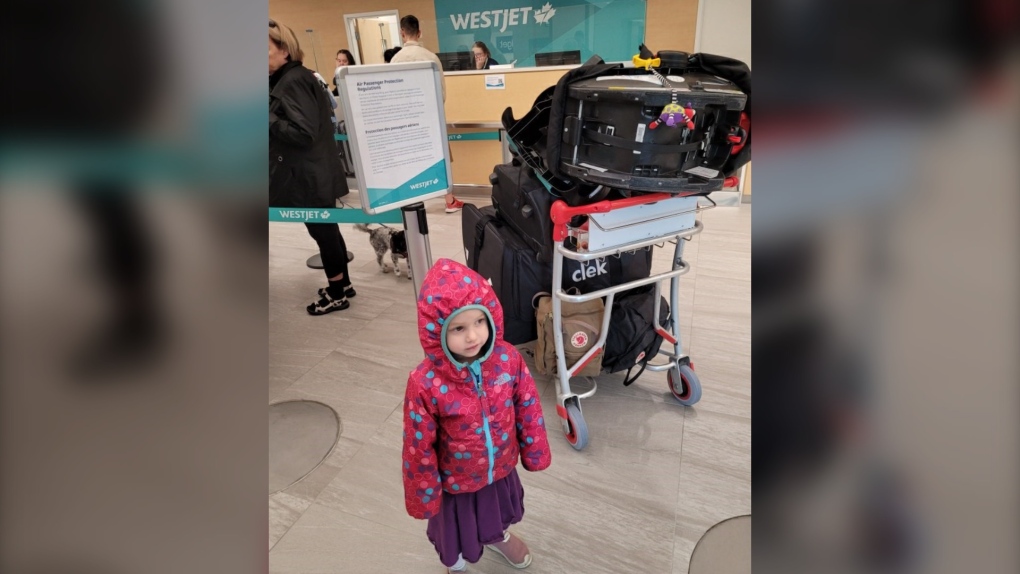 She said she has been directed to an online form for reimbursement.

“No one has explicitly said, ‘Yes you will be reimbursed’ and no one has actually said, ‘No you will not,’” she said.

“It’s a bit unnerving to just have to keep taking your credit card out and get yourself home.”

While Desrosiers’ family had trouble getting home from their trip, a Saskatoon family never got the chance to take theirs.

Rachael Steinke and her family were planning to travel to Louisiana and Florida, with flights scheduled to leave Saskatoon on Sunday evening.

They were supposed to stop in Calgary to get their connecting flight, but never ended up leaving Saskatchewan.

“We got on the plane two hours late and they say something about the oxygen being out in the plane,” she said.

She said they disembarked the plane, continued waiting and then about six hours later, it was ultimately cancelled.

“They rebooked us later for three days later,” she said.

Their new itinerary would bring them to Edmonton for further connections.

“We were actually in the taxi [Wednesday] on our way to the airport, received an email saying the flight to Edmonton had been cancelled,” she said.

She said they waited in line, offered to drive to Calgary to get their connecting flight to the U.S., but were told those seats had already been sold.

“So they had rebooked again for [Friday] and we just said, ‘It’s not worth it,’” she explained.

“It’s been five or six days that we’ve been dealing with this from WestJet, and we just can’t anymore. They offered no solution and they offered no compassion at the airport. We’re back home and we’ve given up our three week vacation because of these delays.”

With two kids and her husband excited to reconnect with family, she said it has been hard on everyone.

“We’ll try again, we’re resilient and we’re a family that will try to find solutions and a way forward, but I’ve got some pretty sad kiddos today,” she said.

In its statement, WestJet said it has accommodated more than 27,000 guests and added 65 extra segment flights to help speed up issues caused by Saturday’s outage.

“We understand that for many, this process has not been seamless and we are deeply sorry for the disruption and stress this has caused,” the statement said.

“As of [Thursday], there are a very limited number of re-accommodation guests remaining, and some may have already chosen alternative options.”

WestJet is asking other guests to refrain from contacting the airline until 72 hours in advance of their flight to ensure calls can be prioritized.

Both Steinke and Desrosiers said they would like to receive direct acknowledgment for the stress this has caused them, as well as full reimbursement for all costs associated with their delays.

“Travelling with children is already difficult, but when it takes 110 hours almost to go two provinces over, it’s a bit beyond,” Desrosiers said.

The federal government failed to spend tens of billions of dollars in the last fiscal year on promised programs and services, including new military equipment, affordable housing and support for veterans.

Economic matters will be top of mind for parliamentarians as they return to Ottawa to kick off a new year in federal politics.

A suicide bomber struck Monday inside a mosque within a police compound in the northwestern Pakistani city of Peshawar, killing at least 28 people and wounding as many as 150 worshippers, most of them policemen, officials said.

Anti-poverty activists are praising the Quebec basic income program as a good step toward helping people meet their basic needs — but say strict eligibility criteria exclude many of the province’s lowest-income residents.

Peru's protest 'deactivators' run toward tear gas to stop it

When police fire tear gas at protesters demanding the resignation of Peruvian President Dina Boluarte, most run away. A few, though, run toward the gas canisters as quickly as possible -- to neutralize them. These are the 'deactivators.'