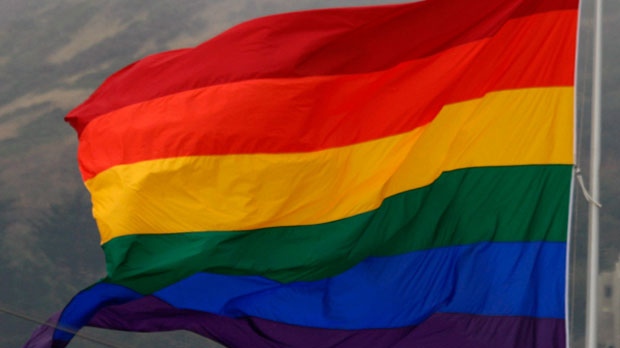 The pride flag is seen here in this undated photo. (Associated Press)

Saskatchewan Premier Brad Wall says the government's policy on gay-straight alliances in schools ensures they can exist and legislation won't make a difference.

The Opposition tabled a private member's bill in April that focused on anti-bullying but it didn't garner government support.

NDP Leader Cam Broten says the government is letting down students who face barriers when trying to establish a gay-straight alliance.

"I've heard from kids and students ... who don't feel like they have the freedom," he said Thursday. "To put the onus on a child or a teen to be pushing as hard as possible for the creation of a (gay-straight alliance), that's backwards."

Wall said schools are already required to create gay-straight alliances when students ask for them.

"What will fix it is a government literally engaging with every education partner, as we will, to say ... we pay for education in the province, this is our policy, it must be followed."

"It's about ensuring that youth ... are safe, that they are protected, that they feel supported," he said. "If we save one life, (where) suicide wasn't considered an option because they had support through their GSA, it's worth it."

Sarah Miller, 25, said she tried to help start a gay-straight alliance at a Humboldt high school when she was approached by families in the community. She said the school wasn't receptive to the idea.

"It was a rough experience because they said it wasn't necessary."

Miller had launched the Humboldt chapter of PFLAG, which is an organization for allies of lesbian, gay, bisexual and transgender people.

"There's no support available at the school," she said. "Having a GSA there would be something I think would be very beneficial not only to the students that are currently there, but upcoming students, as well as teachers."

A spokesman for Horizon School Division didn't immediately return a call for comment.

Miller said she's concerned her two-year-old son will face discrimination for having two mothers once he starts school and she wanted to ensure there are supports in place for him.

"To say that it's not necessary, that it doesn't have to go through legislation ... it made me so mad."

In March, Alberta's Progressive Conservative government passed a bill to allow gay-straight alliances in schools if students want them.

Faith-based schools had fought gay-straight alliances and the issue divided the house in two previous sessions.