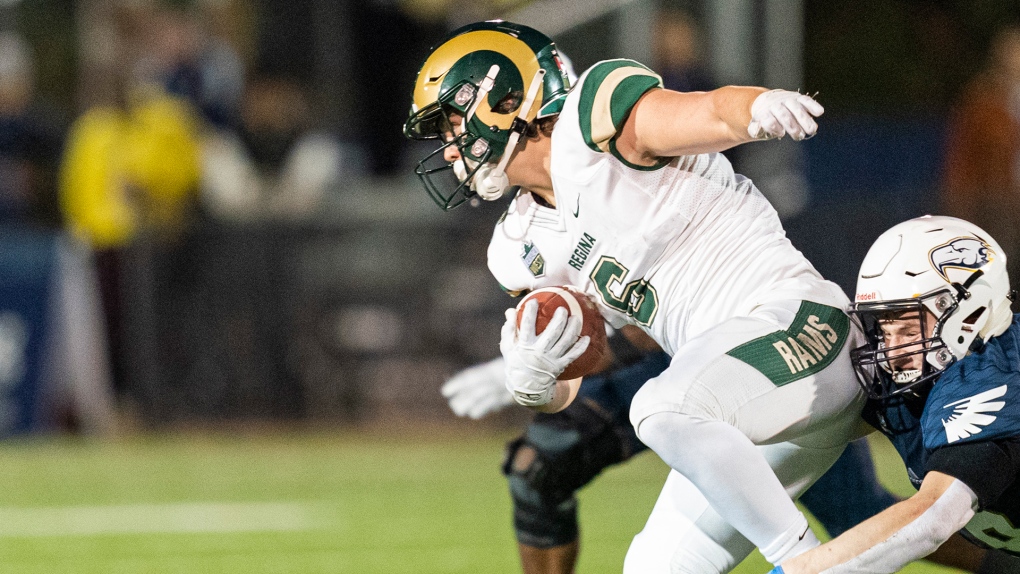 The Rams impressive ground attack opened the scoring with a 31-yard dash from Olivier Savard.

The running back entered the game after an injury to Christian Katende on the team’s opening drive in the first quarter.

Savard went on to put together a great night for the Rams including 103 yards and a touchdown on 22 touches.

The T-Birds tied the game early in the second quarter. Garrett Rooker connected with Lucas Robertson from 21-yards out for the score.

After exchanging field goals with UBC, the Rams put together their longest drive on the night. Pelletier led a 9-play, 75-yard drive.

The possession not only wore down the Thunderbirds’ defence but took 4:42 off the clock culminating in a Pelletier to Stusek touchdown.

Stusek finished the night with four catches for 77 yards and a pair of touchdowns.

Pelletier completed 17 of his 29 pass attempts for 178 yards and two touchdowns.

On the defensive side of the ball, linebacker Josh White recorded eight tackles and one sack. Defensive lineman Anthony Bennett had four tackles and a sack, while Tanner Schmekel recorded a single sack.

“Our defence continues to show they’re among the best in all of U-Sports. It wasn’t a pretty win, but good teams find a way to win.” Said head coach Mark McConkey in a team release. “Our players battled and we were able to finish the game.”

The Rams are now 3-1 on the Canada West season and in second place.

The Rams welcome the University of Alberta Golden Bears to town on Saturday, Oct. 1 at Regina’s Leibel Field at 2:00 p.m.

The suspected Chinese surveillance balloon that was found floating over sensitive military sites in the western United States had been tracked by Canada's government since last weekend as it passed through Canadian airspace, sources tell CTV News.

B.C. man who was mistaken for target, shot by police in 2013 has lawsuit dismissed

A B.C. man who was mistaken for the target in a police takedown and shot by an officer in 2013 has had his lawsuit alleging negligence dismissed.

Bodies are those of 3 rappers missing nearly 2 weeks: Detroit police

Three bodies found in a vacant Detroit-area apartment building have been identified as those of three aspiring rappers who went missing nearly two weeks ago, police said Friday.

Stars disappearing before our eyes faster than ever: report

A new research from a citizen science program suggests that stars are disappearing before our eyes at an 'astonishing rate.'

For much of disgraced South Carolina attorney Alex Murdaugh's double murder trial, witnesses have talked about a generous and loving man -- but prosecutors want jurors to know that same man stole over US$4 million from his housekeeper's relatives after she died at work, and killed his wife and son to cover up his crimes.