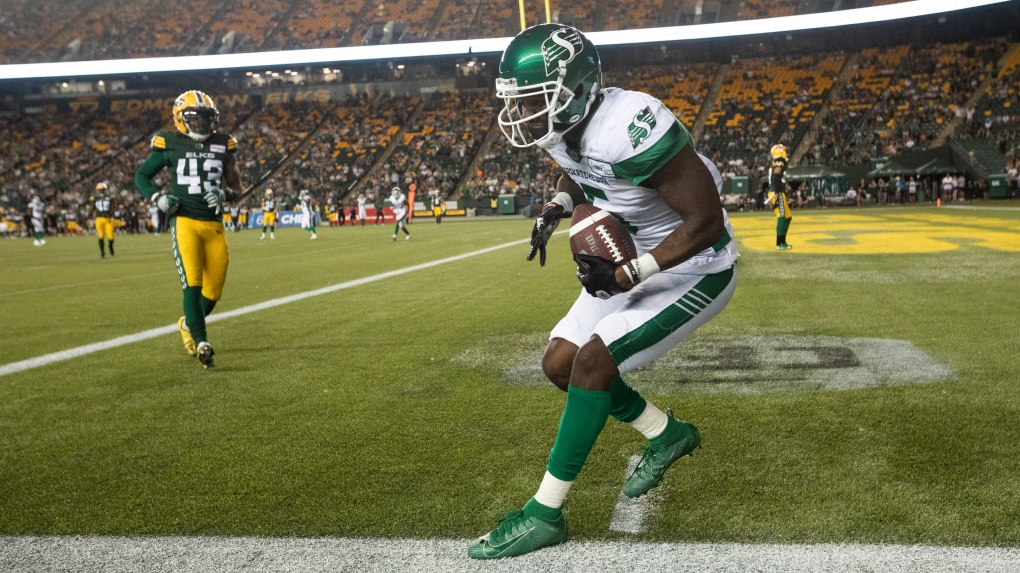 Roughriders quarterback Cody Fajardo scored a pair of rushing touchdowns and one through the air as the Riders snapped a three game losing skid Saturday night with a 34-23 win in Edmonton.

With the latest victory, the Roughriders now have a 5-4 record for the season.

The Riders starting pivot led the team in rushing Saturday with 51 yards on eight carries, just ahead of the team’s starting running back Jamal Morrow who amassed 46 yards on 13 tries.

Fajardo and the Riders answered back on a 77-yard drive that included just one pass to Duke Williams. It was capped off by a Fajardo quarterback sneak into the end zone to give the team an 8-7 lead.

Corneilius would answer back for Edmonton by calling his own number, once again, scoring a 26-yard touchdown using his legs with just 31 seconds left in the half.

On the ensuing kick-off, Mario Alford proved just how elusive he can be. He torched the Edmonton special teams defence for 98 yards to restore the Riders’ lead at 21-17.

There was an extended break at half time due to severe weather in the area.

Edmonton opened the second half with a touchdown and a pair of field goals (44, 46 yards) from Sergio Castillo.

The Riders could not take the lead back until there were four minutes remaining in the contest. Fajardo hit Duke Williams in the end zone for a 24-yard touchdown strike. The attempted two point conversion failed.

The Saskatchewan Roughriders are set to host the B.C. Lions on Friday night at Mosaic Stadium.

Body of missing woman apparently swept out to sea in N.L. found as Fiona recovery begins

A day after post-tropical storm Fiona left a trail of destruction across Atlantic Canada and eastern Quebec, residents of a devastated coastal town in western Newfoundland learned of the death of one of their own.

Meteorologist's shocked reaction to Fiona: 'Like nothing I've ever seen'

NTV News' Chief Meteorologist Eddie Sheerr appeared shocked while offering a dour account of the impact post-tropical storm Fiona had on the southern part of Newfoundland and Labrador.

The herd of wild horses inhabiting Sable Island, which was directly in the path of post-tropical storm Fiona, appear to have come through the extreme weather safely.

Around 100 Canadian troops deployed to each of N.S., P.E.I., N.L. for post-Fiona recovery: feds

In an update Sunday regarding the devastation of post-tropical storm Fiona in Atlantic Canada, federal officials confirmed that the Canadian Armed Forces are already on the ground in several provinces to assist and are on their way to others.

Over 280,000 Maritimers still without power in Fiona's wake

Strong winds and heavy rainfall from Fiona have left over 280,000 Maritimers still without power, as of 11 p.m. local time Sunday.

President Volodymyr Zelenskyy said in an interview broadcast on Sunday that Ukraine had received sophisticated air defence systems from the United States.

Russia's rush to mobilize hundreds of thousands of recruits to staunch stinging losses in Ukraine is a tacit acknowledgement that its 'army is not able to fight,' Ukraine's president said Sunday, as splits sharpened in Europe over whether to welcome or turn away Russians fleeing the call-up.

Prince Edward Island is reporting at least one death following an historic storm that forced thousands into the dark and caused extensive damage across the island.

How age is a big factor for immigration applicants to Canada