REGINA -- Saskatchewan has one new case of COVID-19, bringing the provincial total to eight.

The province says the person is in their 50s. They were tested in Regina following a trip to Vancouver. The person is self-isolating at home. There are now five cases in Regina, two in Saskatoon and one in northern Saskatchewan.

Shahab said the province is moving in the right direction and there has been a slowdown in the number of new cases. He advises people should continue to social distance and stay home for the next few weeks.

"We are, as a province, moving in the right direction," Shahab said.

Snowbirds who are returning home from travel to the United States should self-isolate for two weeks. Anyone not self-isolating after travel poses a large risk to hundreds of other contacts. 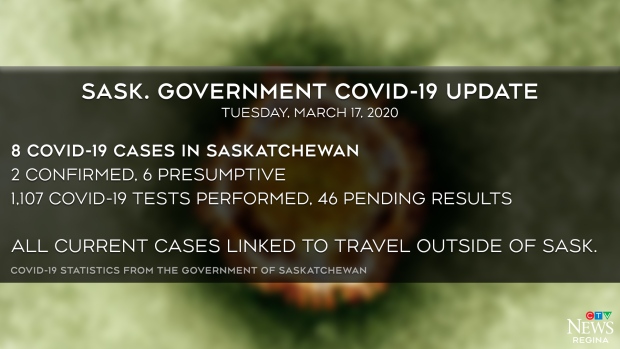 The province's website says there have been 1,107 COVID-19 tests performed so far. There are 46 tests pending results. There are two confirmed and six presumptive positive cases as of March 17.

Five of Saskatchewan's cases are due to international travel. Two others were at a dental conference in Vancouver where they were exposed to the virus. The final case was a person in direct contact with a person who attended the conference.

Doctors are being told to use their clinical discretion as far as testing is concerned.

Although Ontario, Alberta and B.C. have declared public health emergencies, Saskatchewan isn’t moving towards that measure yet.

"At this point we are able to enact all the steps we need under the Public Health Act," Shahab said.

The province is cracking down on large gatherings of more than 250 people. Shahab also recommends cancelling weddings and other large events.

Schools will be closed province wide starting on Thursday.

"We are looking at [daycares] closely," Shahab said. "We can support people who have to go to work."

The risk from the infection is lower for children, but Shahab says the province is minimizing crowds and large groups for all ages.

Kids also need to be reminded to wash their hands. Shahab says they should be encouraged to play in outdoor environments while they are home from school.

The province is focusing on supporting people on the front line. Shahab said precautions taken by health workers in other countries shows they can minimize exposure for those workers in Saskatchewan. Twenty per cent of all tests are in healthcare workers, according to Shahab.

Canada shutting the border to most non-citizens due to COVID-19: PM Trudeau

How the pandemic is playing out on the B.C.-Washington border

Canada's workforce having to adjust to working from home

'The time has come': Cineplex closing all theatres across Canada

Canadians in Europe provide a glimpse of life under lockdown

Tokyo Games on for now, but some Canadian athletes wonder how to get there