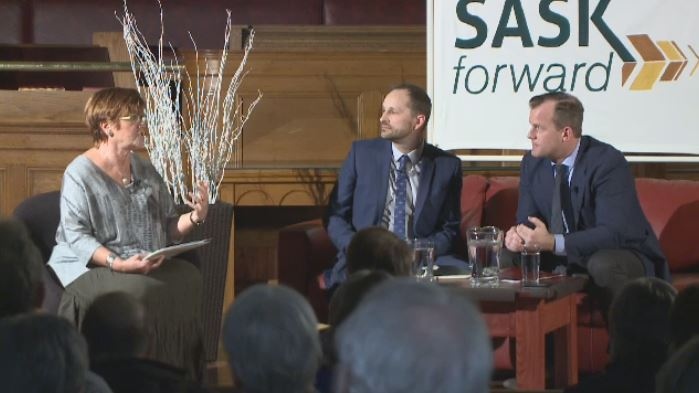 Saskatchewan NDP leadership hopefuls Trent Wotherspoon and Ryan Meili took to the stage on Monday at Westminster United Church in Regina to debate a number of topics.

The event was put on by SaskForward and the candidates took questions from the public. The questions ranged from decolonization to climate change and minimum wage.

Meili said he’d like to see an annual report on the outcome of steps towards reconciliation with First Nations people in Saskatchewan.

On the other hand, Wotherspoon spoke of a goal to bring in a funded conciliation program into Saskatchewan and pointed to his background as a teacher working with children and Indigenous education.

“Trent’s been part of the team for quite a while, but also part of the same approach that we’ve been taking and it really is important we come forth with a new approach,” Meili said.

Both candidates agreed to phase out coal power generation by 2030 and Wotherspoon said if he became premier he would not phase out oil and gas but believes there is a transformation happening in the energy sector.

“I would be very focused on making sure that we have the economic opportunities and supports for communities and for workers,” said Wotherspoon.

“The phasing out of coal is largely a product of the regulations brought forward by the Harper government. What we need to do now is to provide leadership in Saskatchewan to make sure that workers and communities have supports and opportunities in place.”

Meili and Wotherspoon also agreed to raise minimum wage to $15 per hour in their first term in office if elected premier.

Meili added he’d like to see a provincial pharma care program if the federal government doesn’t step up.

“We pay far too much for brand name and generic drugs in Saskatchewan,” Meili said.

“We should have a national pharma care program. That would save us billions of dollars a year, not to mention improving people’s health, because they’d get the medications they need. If we can’t get there at the federal level, if the Prime Minister isn’t ready to do it, then maybe we have to show the lead here in Saskatchewan, something we’ve done before.”

The NDP leadership is up for grabs after Cam Broten resigned following the 2016 election. The election for the new NDP leader will be held on March 3.