In a release Saturday, the province announced that 75 of the 313 cases are considered active.

Saturday’s numbers include cases from the La Loche area that were reported on Friday.

Six more people have also recovered from the virus, bringing the total to 234. 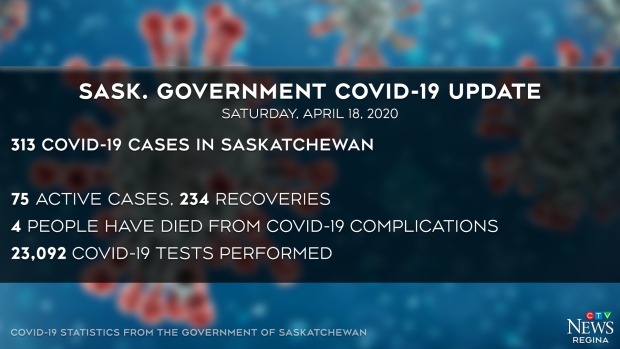 There are currently five people in hospital in Saskatchewan, including one in intensive care.

Of the 313 cases in the province, 134 are travel related, 132 are contacts or linked to mass gatherings, 29 have no known exposures and 18 are currently under investigation.

Health care workers account for 35 cases, however, the source of the infection may not be related to their work in all cases.

The Saskatoon area continues to lead the province with 148 cases, followed by 70 in the Regina area, 59 from the north, 15 from the south, 11 from the central region and 10 from the far north.

Men make up 52 per cent of cases while women make up 48 per cent.

As of Saturday, 23,092 COVID-19 tests have been performed in Saskatchewan.