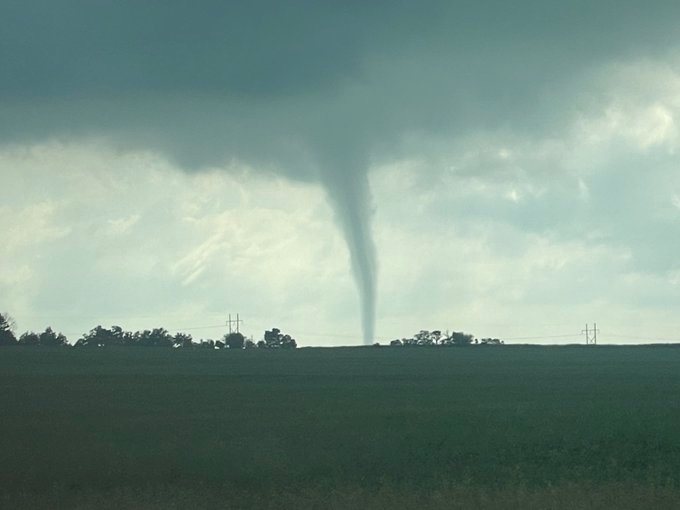 Well, as August comes to an end, that means one thing in my books: we're just a few short days away from meteorological Fall. I know, I know, some people don't want to talk about changing leaves and shorter days and cooler temperatures just yet but they are right around the corner.

However, if you want to hang on to the dog days of summer, there is some heat in the forecast through the Labour Day long weekend, so it's not quite fall weather out there just yet.

This summer was a wild one - particularly when it comes to weather. We had a bit of everything and compared to last year, there was substantially more active weather.

According to the Northern Tornadoes Project, there were 25 confirmed tornadoes with the highest damage rating being an EF2. Besides tornadoes, there were also numerous storms, sweltering heat and a lot happening in the weather. So let's break down the biggest summer weather events in Saskatchewan for 2022!

THE FOAM LAKE TORNADO AND FOUR OTHERS

I think we have to start with the Foam Lake Tornado when we talk about this summer because it probably takes the cake as the most memorable and beautiful tornado of the year. It had a stunning structure and there were lots of photos taken of it on June 29.

It was classified as an EF1 and it wasn't the only tornado that night. In fact, five tornadoes were reported that night according to the Northern Tornadoes Project.

Tornado from earlier near Foam Lake #skstorm sent to me by my dad back for damage assessment tomorrow pic.twitter.com/9itKFjtHKH

It happened on what was the first real wild weather night of the year, with multiple tornado-warned storms and severe-warned storms. There was hail, gusting winds and heavy rain across southern Saskatchewan in addition to the tornadoes.

I was barely able to breathe on-air that night, trying to give all the forecasts and warnings for all the severe storms. We actually had a few nights like that this summer, where a large portion of the province was under some sort of watch or warning.

Crews were called at 3:55pm for multiple vehicles in the ditch west of Regina near Grand Coulee. Minor injuries reported by firefighters. Crews are now clear of the scene. #YQR pic.twitter.com/SGfwuQIyZD

Before all the tornadoes this summer, June and the start of meteorological summer kicked off with a pretty impressive storm that brought substantial hail. It almost looked like a blizzard made its way along the TransCanada highway and during the storm, conditions weren't much different.

Cars ended up hydroplaning and drivers couldn't see the road. Emergency crews were dispatched to multiple vehicles in the ditch.

We had just finished winter and suddenly this summer storm was bringing white out conditions. It was a good reminder that summer storms that have wind, rain and hail can decrease visibility just as much as snow storms.

Highest temperature of 2022 set today in #Canada 🇨🇦 and first 35°C of the year, all in #Saskatchewan.

A large portion of the country, including Saskatchewan, had a slow start to spring and summer but the heat was really starting to build in by mid-June. Moose Jaw and Regina were the first places in the country to hit 35 C this summer, which is a fun statistic! Since then, we have had plenty of heat and heat warnings across the province.

REGINA AND SASKATOON BOTH FLOODED

People across the province were all hoping for some rain this summer after drought conditions last year, and the rain definitely happened. That being said, some storms brought more water than we would have liked in a short period of time.

A few of the initial rainfall totals from last night's storm. Lots of rain in Regina! Average July precip for Regina is 66.9 mm (1980-2010 average), and we almost hit that in one night. #SKStorm @CTVRegina pic.twitter.com/f75pZRv90X

Regina saw a lot of sunshine this summer, with some storms thrown in, but the most substantial rainfall we saw happened on the night of July 18 into the day on July 19 with upwards of 65 millimetres falling. Some of the surrounding areas around the city may have seen up to 100 millimetres. That is a lot of water!

As for Saskatoon, the flooding happened on June 20. This was an interesting one that showed just how much water can be in thunderstorms. A slow-moving, almost stationary storm pushed into Saskatoon, bringing heavy rain in a very short period of time.

It was estimated that some areas saw upwards of 60 millimetres in just two hours. This was an amount of water that the city couldn't handle and a large number of roads were flooded.

The U.S. military on Saturday shot down a suspected Chinese spy balloon off the Carolina coast on orders from President Joe Biden, after it traversed sensitive military sites across North America, becoming the latest flashpoint in tensions between Washington and Beijing.