'They're eating all the crops': Grasshopper infestation wreaking havoc on farm north of Regina

FAIRY HILL -- An infestation of grasshoppers is wreaking havoc on lawns, pasture land and crops north of Regina.

Lorelei Cornell and Rick Bathgate have been dealing with the grasshoppers for a few weeks on their farm near the hamlet of Fairy Hill.

“They’re eating all the crops in the area,” Lorelei Cornell said. “Our front lawn is gone and they’re eating our pasture, so all the grass for our horses is slowly disappearing.”

Dr. James Tansey, the Province’s entomologist, said these insects are a part of a high-density localized outbreak of clear-winged and two-striped grasshoppers.

Tansey said the hot and dry condition in the Fairy Hill area have allowed these insects to thrive. He is encouraging producers in the region should start monitoring their grasshopper populations.

“Numbers can be very high.” Tansey said. “It really is a numbers game. Broad acceptability of different host plants and they can cause a lot of damage in a hurry.”

Along with the concerns of running out of pasture for their horses, the large amount of the insects are also a nuisance. 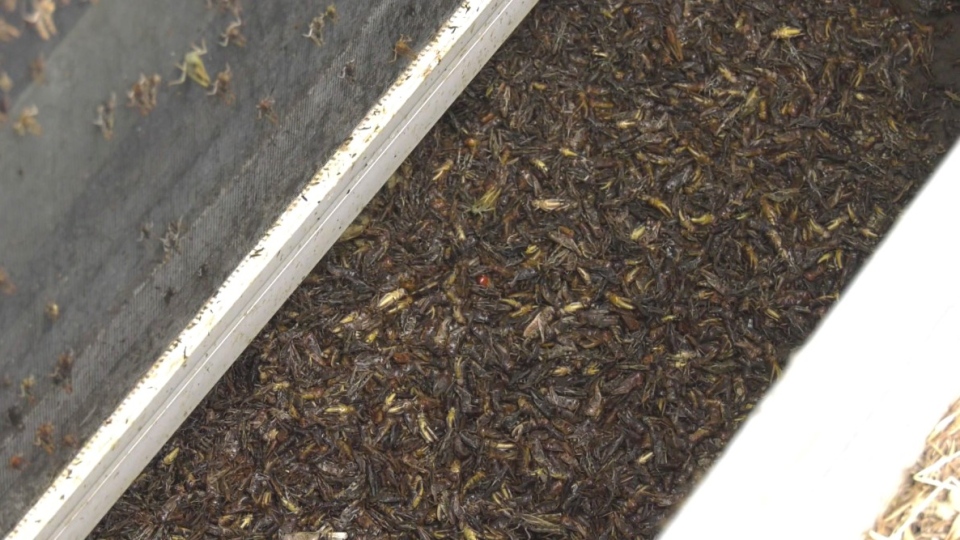