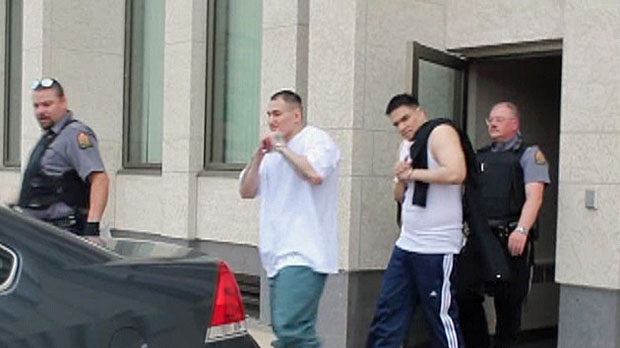 Two Regina men have been sentenced to eight years in prison for their role in the gang-related beating death of another man in the city.

David Dustyhorn, 24, and Ryan Kay, 26, both pleaded guilty Friday to manslaughter in the death of 26-year-old Raymond Gardypie of Regina.

With credit for time spent on remand, Dustyhorn will spend a further 16 months behind bars, while Kay will serve another two years.

Gardypie was found dead in the basement of a home in the 1000 block of Retallack Street in North Central Regina in January 2010.

Court heard Gardypie, who was a member of the Native Syndicate gang, said or did something to disgruntle fellow gang members.

He was invited to a house party by another gang member, and when he arrived, five other men with ties to the Native Syndicate began assaulting him.

Gardypie was then ordered into the basement, where he was subjected to a gang ritual called “de-boarding,” which is a beating that precedes someone’s departure from a gang.

The victim suffered severe injuries to his head and torso, and was left to bleed to death.

In victim impact statements filed in court, relatives of Gardypie described him as "small in stature with a big heart" and "a gigantic sense of humour."

Dustyhorn and Kay were among five people who were originally charged with second-degree murder in the slaying.

In November 2011, a judge sentenced Joseph Kirkness to 10 years and Robert Gordon to 12 years after both men pleaded guilty to manslaughter in the death.

A male youth, who was 17 when he was charged in connection with the death, remains before the courts.