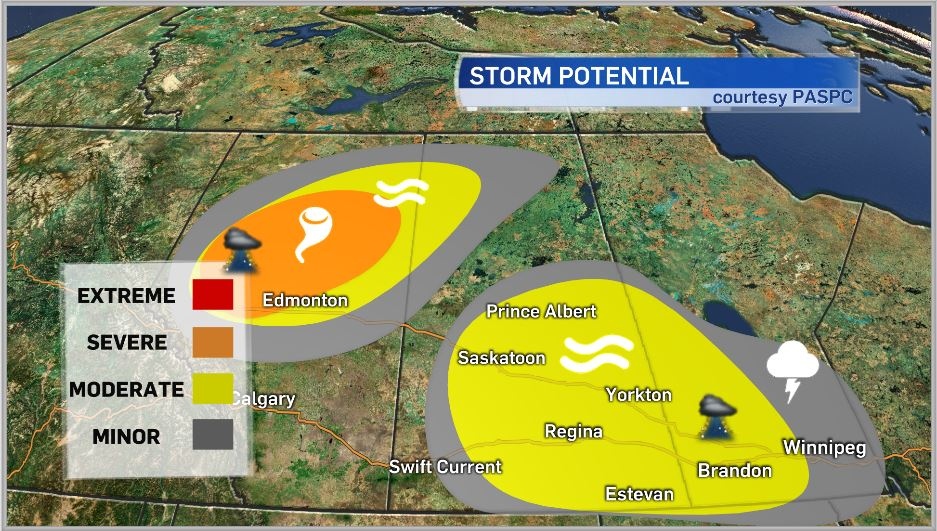 Nocturnal storms that moved into Saskatchewan will continue to move north eastwardly through the day with more development this afternoon and evening. With a ridge of high pressure firmly stationed over the eastern prairies convection will be stunted for most of the day until late afternoon and early evening. As storms bubble up and move into a more moist area storms will intensify.

We also have a developing low pressure system in central Alberta, that low will support thunderstorms in central Saskatchewan during the late evening and overnight periods.

Heat warnings remain in place for southern Saskatchewan, highs at 32 C or higher and overnight lows 16 C or warmer will persist through Saturday. Sunday will see the return of normal temperatures for this time of year.

As we get into the month of august, the last of meteorological summer, here’s a look at some of the rainfall numbers we had in July (courtesy Environment and Climate Change Canada).

Meadow Lake saw some big number with almost 150 mm of rain in the month, the fourth wettest for the regions. On the opposite end of the scale is Swift Current with just under seven mm total for the month and seeing their fourth driest month. La Ronge also saw a bit more than normal. Moose Jaw was drier recording 29.9 mm compared to the normal of 63 mm. Regina and Saskatoon were right around the average marks. As we dig into the month of August we’ll see storm development slow down and we’ll get into some steady seasonal temperatures next week. 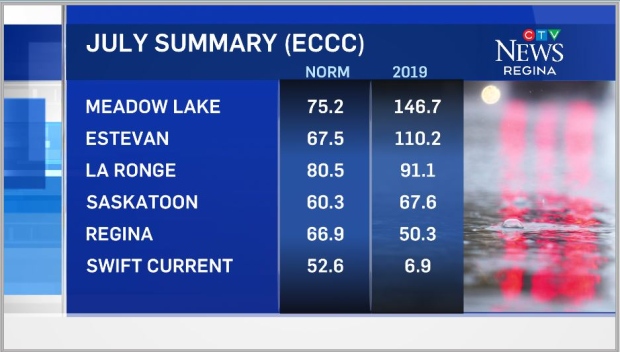