REGINA -- Saskatchewan has one new COVID-19 case and nine new recoveries, the province said on Tuesday. The province has 301 total cases, with 110 considered active. In total, 187 people have recovered from the virus.

There are seven people receiving inpatient care. Of the total cases in the province, 147 are located in Saskatoon, 65 in Regina, 57 in the north, 15 in the south, 10 in the central region and seven in the far north.

He noted that Saskatchewan didn’t see it’s first case until four to five weeks after other provinces, and it’s difficult to tell whether or not the province will follow a similar trajectory. 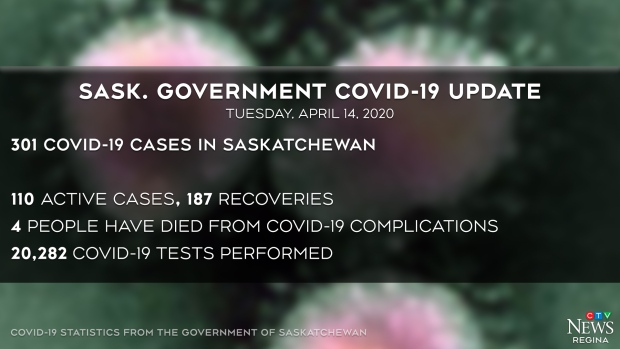 131 cases are considered travel related, 121 are a result of community contact, 27 cases are not associated with a known exposure and 22 are still under investigation.

A total of 34 cases have been confirmed in healthcare employees, and 19 of them have recovered.

53 per cent of cases are men and 47 per cent are women. There have been four deaths in the province. To date, Saskatchewan has conducted 20,282 tests.

The Saskatchewan Health Authority (SHA) says all staff members will be required to wear a mask going forward.