All grades at Yorkton Regional High School and pre-kindergarten to Grade 6 at Davison School in Melville are moving to remote learning for the next week.

"It’s somewhat concerning in that we don’t have experience with [the variant] and it’s something new," Quintin Robertson, GSSD’s director of education, said.

"We’ve tried to take a measured approach, we have no experience with this, so we wanted to air on the side of caution."

Robertson said with the help of local health officials, the school division has deployed rapid testing at both schools to proactively find any additional cases.

Classes have been cancelled for Monday and Tuesday at Davison School and just Monday at Yorkton Regional High School.

A return to face-to-face learning is tentatively scheduled for next Tuesday.

Since returning to in-person learning last fall, GSSD has dealt with about 50 cases of COVID-19, according to Robertson. He said he’s noticed an increase over the past week, including transmission within two schools.

"On Sunday, we had four situation, four different schools pop up on Sunday alone," Robertson said.

In addition to the two schools with variant cases, GSSD also has students learning remotely in Esterhazy, Kamsack and at Yorkdale Central and Columbia schools in Yorkton.

The school division is increasing public health measures to help limit the spread.

"All of our students and staff are masked while at school, we’ve expanded that for our staff to include medical grade masks and face shields when they’re in any type of close proximately to any other individual," Robertson.

Regina school have also seen an increase in cases over the weekend with five cases reported at public schools and 10 at catholic schools between Friday and Monday. 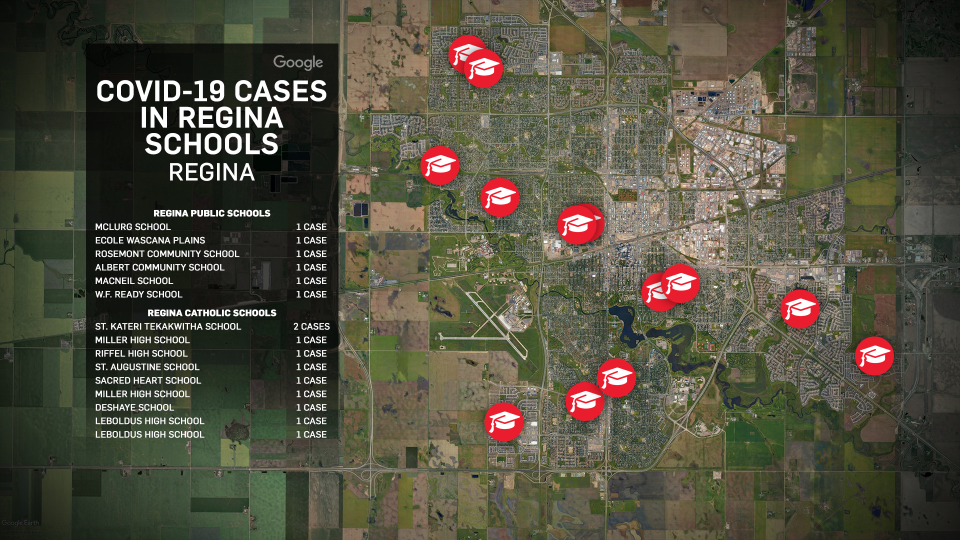 The number of variant cases in the province has grown to triple digits with 70 confirmed and 210 presumptive, including 185 in Regina.

The Central East region where GSSD is located has five presumptive cases.

The B.1.1.7 variant has been found to be up to 70 per cent more transmissible than the original strain of the coronavirus, which an epidemiology professor said could spell a problem for schools.

"We are learning that this variant is much more prevalent in younger people and we know that in younger people, they could be more asymptomatic spreaders," Dr. Nazeem Muhajarine, professor of epidemiology and public health at the University of Saskatchewan, said.

He said acting quickly will be key to limiting the spread.

"Where we think that it might be spreading in schools, that the schools might be seeding this variant, it is prudent to take some measures to be safe, so if that means remote learning and even being more vigilant," Dr. Muhajarine said.