Demonstrators use symbolic ropes in call for removal of Sir John A. Macdonald statue 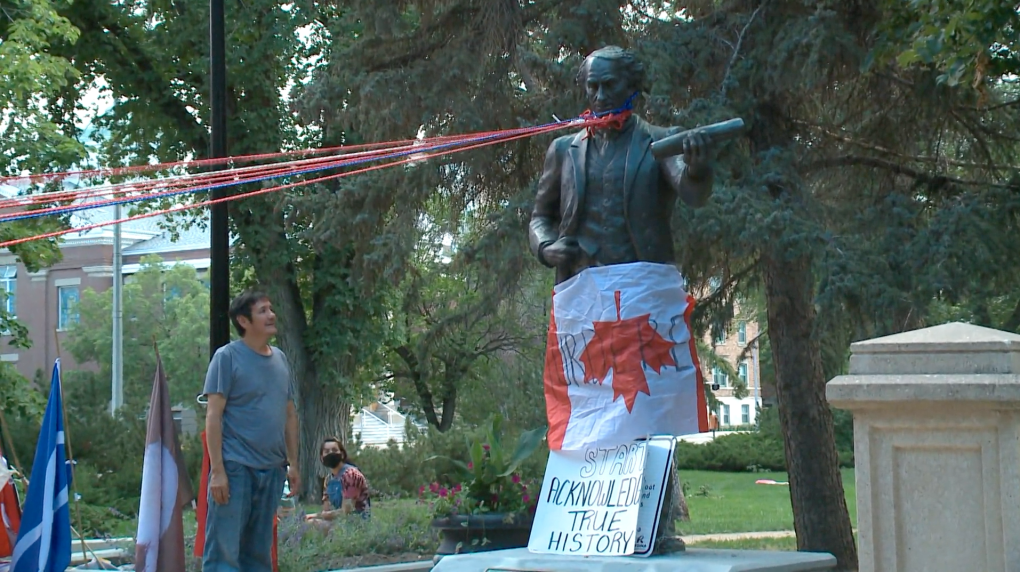 A bystander looks on as demonstrators advocate for the removal of the Sir John A. McDonald in Regina.

REGINA -- A group of demonstrators tied ten ropes around the neck of the Sir John A. Macdonald statue in Victoria Park on Sunday, as part of a display calling for the City of Regina to take down the monument.

The demonstrators said they have had enough with the statue in Victoria Park, and wanted to educate the public about Canada’s first Prime Minister.

“We just wanted to show the city that we mean business. we want it down,” demonstrator Star Andreas said.

The group said they didn’t plan to actually bring the statue down over the weekend, but wanted to re-enforce the history of what the display means to many.

“Once this guy goes down, we can start going forward, everybody,” demonstrator Simon Moccasin said.

The City of Regina is currently conducting a legacy review of the monument, and plans to reach out to Indigenous elders, artists, community members and other cultural groups for guidance. The review will look to respond to harmful legacies and help understand Regina’s diverse histories. The general public will also have a chance to speak to the city about the statue.

“They have this sign here, saying oh we’re going consult people in the community and they think it’s some historical, it’s not a historical thing. if you buy into that you’re racist too. that’s what the whole point is,” Moccasin said.

A University of Regina history professor calls the situation complicated, saying there is never going to be an agreement by all parties involved.

Blake says he doesn’t know what should be done with the statue in Victoria Park… but says it’s always a good idea to review any cultural policy.

The City of Regina is still working through the legacy review. Almost 300 people have signed up to receive email updates throughout the project. The City also plans to update the public after consulting with Indigenous elders in mid-August, before making any decisions.