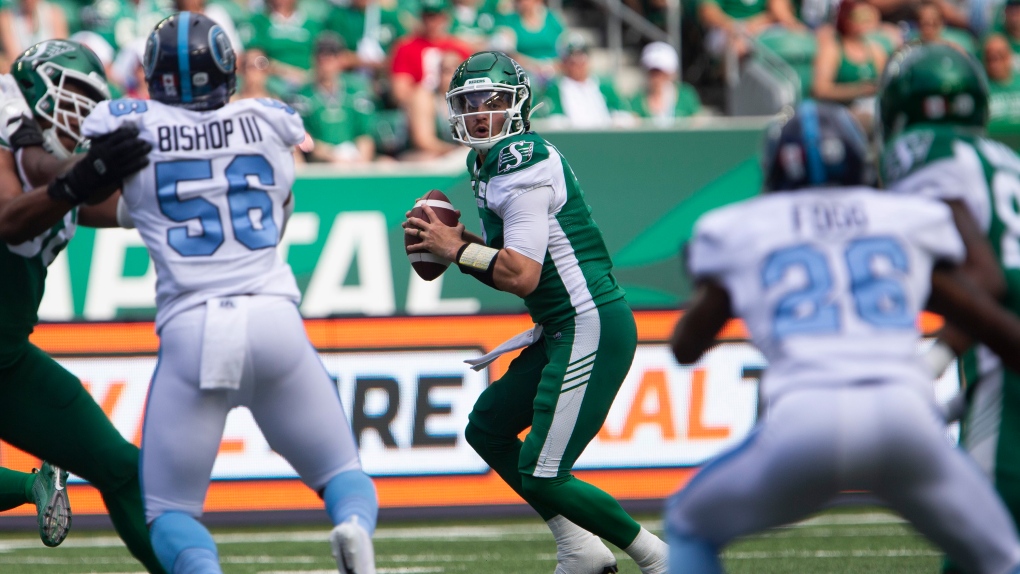 The Riders were firing on all cylinders on both sides of the ball for their Canada Day Home Opener, beating the Toronto Argos 32-7.

The offense came out flying, led by quarterback Cody Fajardo, who eclipsed 400 passing yards in just his second start for Saskatchewan.

“I think a lot of times when you’re a backup for so long you get to see things and you don’t get thrown into the fire,” said Fajardo. “Now you’ve got an opportunity and you’ve got to show out or else you’re out of the league.”

Roughriders coach Craig Dickenson earned his first career win as a CFL head coach. He noted that it was the players who got it done on Canada Day, and he said he has noticed a change in his starting quarterback that helped create the offensive explosion.

“He makes plays,” said Dickenson. “The game has slowed down for him a lot.”

Fajardo said the first win for the Green and White was an overall team effort. But he also admitted that he has surprised himself with his own offensive production, with just under 800 yards passing over the last two games.

“Last week was definitely the most I’ve ever thrown in my career, and this week obviously tops that,” said Fajardo. “Usually I’m a runner and I haven’t run much.”

The Riders offense was firing in the first half scoring 26 points. Following two field goals to start the game, the Riders’ offensive playmakers got going following an interception from linebacker Derrick Moncrief deep in Rider’s territory.

On the next play, Fajardo was able to take advantage of the turnover, connecting with receiver Kyran Moore for a 98 yard touchdown bomb to end the quarter, putting the Riders up to a 13-0 lead.

Moore used his speed to get the jump on the defense pressing him off the line of scrimmage, to get open for the deep shot. Moore said tonight’s performance was aided by his high level of trust in Fajardo’ ability to manage the offense.

“I have just as much confidence in him as I do in Zach [Collaros],” said Moore. “He came in, he showed leadership and he showed he can ball, so he got my trust automatically.”

Fajardo finished the night with two scores through the air, and one on the ground. He could have had an even bigger night, with another rushing touchdown called back on a holding call.

Multiple thunderstorms moved over Mosaic Stadium and some heavy rain and lightning caused a more than two hour delay before the end of the first half. Dickenson said he was concerned about the long delay disrupting his squad’s rhythm, but even with a slow start to the second half, the Argos did not have an answer for the Green and White on Monday night.

“We took the approach that we wanted this badly,” said Dickenson. “We weren’t going to let the rain or the sun get in our way.”

A Riders defense that gave up a total of 58 points over their first two weeks, held the Argos to 314 total yards and just one touchdown. The unit also racked up two interceptions, which Dickenson said was a focus at practice this week.

They capped the game off with a solid fourth quarter, adding two sacks, and another interception from defensive back Nick Marshall. Defensive end Charleston Hughes added another two sacks on the night, bringing his season total to four.

“If they’re scoring week in and week out, it gives us confidence as a defense,” said Edem. “Keep giving them the ball back, especially with interceptions, they’ll do that all day.”

The Roughriders will be back at Mosaic Stadium on Saturday, taking on the Stampeders on a short week.

The win moves the Riders to 1-2, while the Argos struggles continue falling to 0-2

With files from CTV’s Claire Hanna