The family members of former residents at a Regina care home want answers and compensation after the owner abruptly closed the facility earlier this month.

Grace Within Care Community, located at 219 and 223 Toronto St. in Regina, closed its doors April 18.

The two homes housed eight residents, many with physical disabilities, dementia and other health issues.

The residents’ families said they received a 30-day written notice of closure from the owner on April 12. They were also informed that an interim manager had been hired to oversee the closure.

Less than a week later, family members said the owner contacted them again.

On April 18, they were told the interim manager had been fired, the staff had quit and there would be no one to take care of the residents as of 11 p.m. that night.

“It was criminal how our pioneers of our province of Saskatchewan were being treated, practically being put out on the street,” said Brenda Ludtke, whose mother and mother-in-law both lived in the care homes.

Ludtke, along with the rest of the families, said they scrambled to find other accommodations and care homes to move their loved ones. 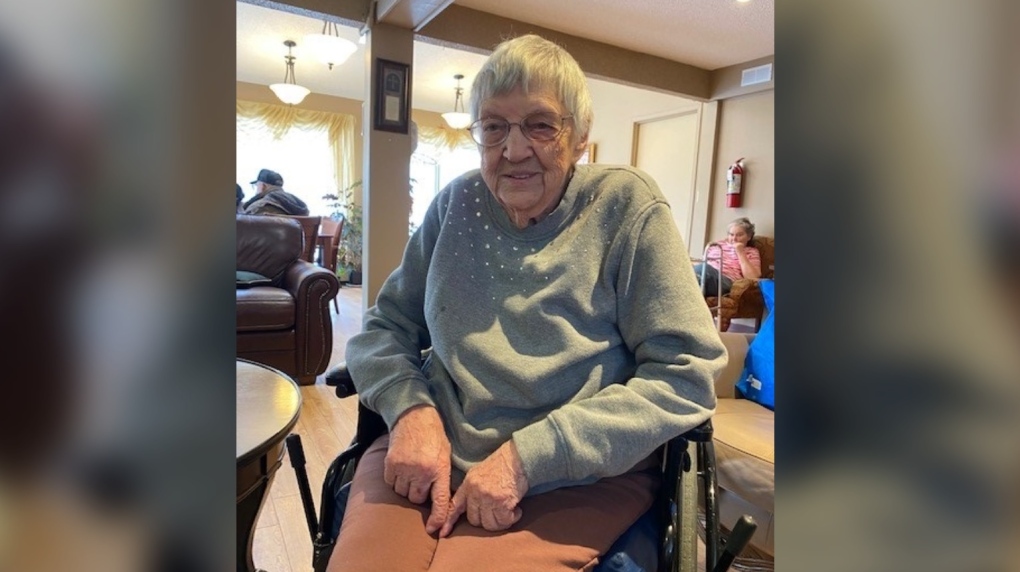 She said it took until 8 p.m. that night to find a place that would accept her mom who is 97 years old, blind and bound to a wheelchair.

“It was with great difficulty that we tried to find her a placement not just with the 30 days notice, but now with just mere hours to do it,” Ludtke said.

Ludtke was able to find new homes for both her mother and mother-in-law. Four others managed to move facilities that day, too.

However, two residents were unable to find accommodations day-of and had to be placed in temporary facilities, according to the Ministry of Health. They have since found permanent housing.

The Ministry of Health was notified on April 18 that as of 11 p.m. that night there would be no staff at the Grace Within care homes, according to a statement.

“The Saskatchewan Health Authority moved quickly to ensure the last two remaining residents had temporary placement in other facilities before the facility closed its doors. This included the necessary assessments to ensure proper and safe placement,” the ministry said.

According to the government’s personal care home (PCH) regulations, PCHs must provide the Ministry of Health and residents with 30 days written notice of closure. PCHs must also assist residents with an orderly relocation.

All PCHs, regardless of size, must follow the requirements under the Personal Care Home Act. Violations can result in legal penalties, according to the ministry.

Larger PCHs must meet a few additional requirements as they have more residents to support. Those include issuing a longer notice period before closure, licensed nurses, and the production of security such as a bond or irrevocable letter of credit.

Ken Kreklewich, whose mother lived at Grace Within, believes if all care homes, regardless of size, were required to produce a security bond, then this situation would not have happened.

“We’re calling on the minister to step in and hopefully make changes to the legislation to protect everyone,” Kreklewich said.

“The ladies in this home are elderly, they are unable to tend for themselves and it makes no sense that they’re not protected.”

Kreklewich, along with the other family members, also want the government to revoke any of the Grace Within owner’s personal care home licenses to prevent them from opening new homes.

The ministry said the Grace Within incident “will be taken under consideration should future changes to regulations be contemplated.”

CTV News reached out to the owner of Grace Within Care Community to comment on the accusations.

In a statement, spokesperson Kaisse Caven said the care home faced financial trouble due to COVID-19, but “resident health and safety remained our first priority.”

“We attempted to get back on our feet, but ultimately were forced to close our doors,” she said.

“During our time operating Grace Within we had the pleasure of building relationships with our amazing and dedicated staff as well as getting to know all of our wonderful residents and their families,” she said.

Caven added they are sad to close their doors, but “thankful for the wonderful years we had.”

The statement did not address any of the other accusations.

Grace Within staff members were caught off guard with the closure, according to former employee Rhonalyn Bilango.

“I feel like they just threw us in the garbage.”

Employees have not received a pay cheque in the last month, she said.

Bilango, who worked at the care homes for almost four years, said staff had to provide their own personal protective equipment and groceries for residents out-of-pocket in the months leading up to the closure. 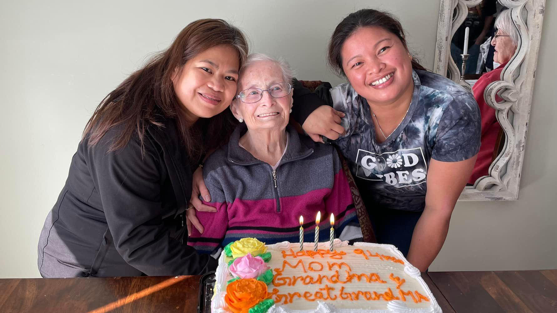 Grace Within resident Elsie celebrated her 94th birthday two days before she moved out of the care home. (Submitted)

Now that Bilango is out of a job she is asking for compensation.

“We want (the owner) to pay us. That’s the only thing that we want because we have families. We have bills to pay,” she said.

Bilango does not know where she will find work next. However, Kreklewich said the residents’ families are trying to help former staff find new jobs.

“The staff was fantastic,” he said.

“We have the highest gratitude for them.”

Many of the former residents at Grace Within have dementia and are bound to wheelchairs or have other mobility issues, which made it difficult for them to find accommodations on such short notice, family members said.

Krecklewich’s mom, Loretta, recently celebrated her 87th birthday. She suffers from dementia and has to be in a care home, he said. 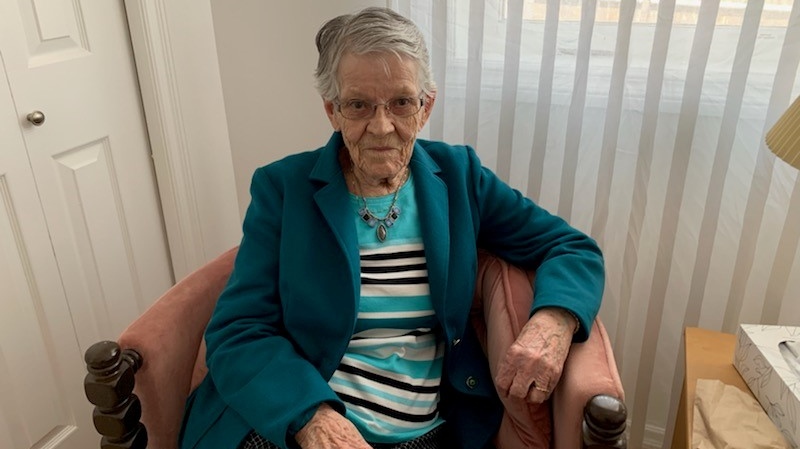 Kreklewich got a call at 10 a.m. the morning of the closure. He said he had his mother moved out by 2 p.m. that same day.

“We didn’t have a lot of time, there was a lot of panic by the families, but we thought we did have 30 days,” he said.

Kreklewich said his mom “thought she was being punished,” because she had to move.

He said he feels foolish for not noticing the “rapid decline” at Grace Within sooner.

In January, both staff and family members said they began noticing safety issues with the care homes, including the lack of smoke detectors, short staffing and dangerous areas in the backyard of the homes.

“Despite the hardships endured, I am comforted in knowing my mom is now in a secure environment,” he said.

Ludtke’s mother, Eleanora Neigel, has been struggling to adjust to the move.

During one of the first nights at her new care home, Neigel woke up at midnight, got in her wheelchair and rolled up and down the hallway, Ludtke said. She finally settled back to bed around 4 a.m.

Ludtke wishes she could take care of her mother at home, rather than relying on a facility.

“My mom took care of her mom right until she passed away. I wish I could,” she said.

“I have limitations and can’t. I can’t get her up into my home. I don’t have the room.”

As for Ludtke’s mother-in-law, May, this was her second move in less than a month. 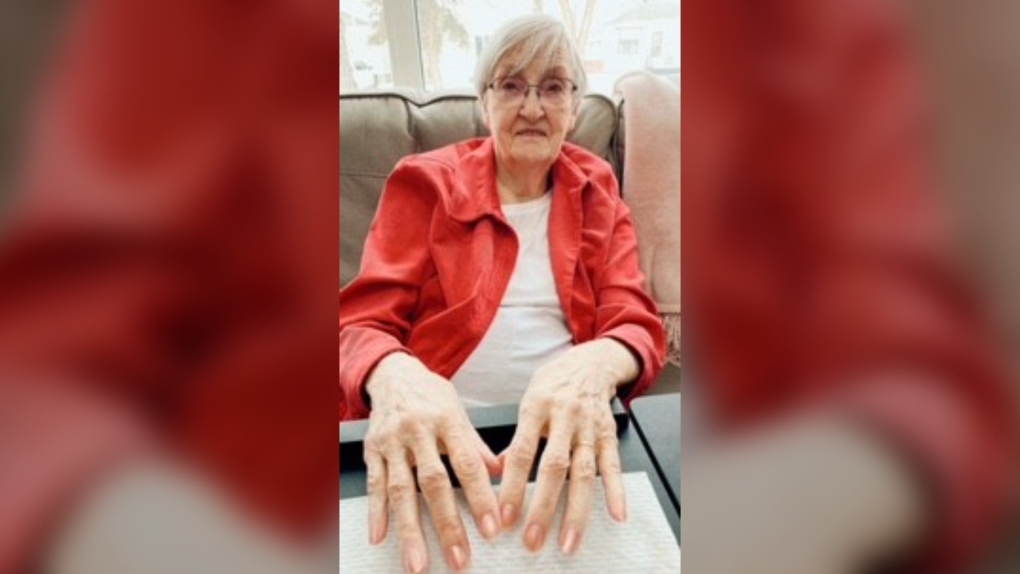 May Ludtke, moved to Phase I of the Grace Within care homes after the Phase II home closed in March. (Courtesy: Brenda Ludtke)

May lived in Phase II of the Grace Within care homes, located at 223 Toronto St. Ludtke said that home closed on March 16, which is when May moved to the Phase I care home next door.

“She was enjoying living there and would say staff was so good to her,” Ludtke said.

“She really was stressed and vocal to the family that she did not want to leave when we were packing and readying her to move so suddenly on Easter Monday.”

All eight residents have found accommodations.

The families said they want to be reimbursed for the services they did not receive from the care home, including a half a month of rent.