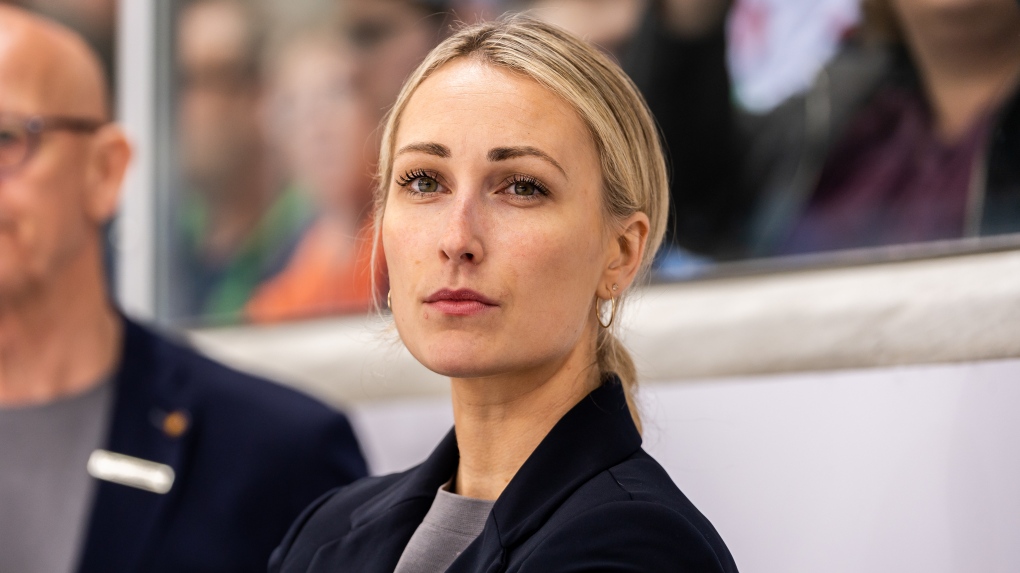 Hayley Wickenheiser, Danielle Goyette and Kendall Coyne-Schofield are among some of the names of female hockey trailblazers – a list Rocanville, Sask.’s Jessica Campbell could soon join with her work behind the bench at the international and professional level.

After a successful collegiate and international career as a player, Campbell didn’t feel like her life in hockey was over.

Instead of lacing up the skates on the ice, Campbell moved to a job behind the bench, and worked on the game past when the final buzzer sounds.

The work she put in has paid off – as Campbell became the first woman to be behind the bench in international competition this past summer, with Team Germany at the World Championships.

Those two weeks in May however, changed the trajectory of Campbell’s career and blazed a path for the next generation of female hockey players.

‘EVERYTHING STARTED IN SASKATCHEWAN’

Rocanville’s population may not be staggering, yet the community of around 900 is about to be noticed for more than just it’s “World’s Largest Oil Can.”

Campbell said her upbringing was in both the small southeastern community in Rocanville, along with Melville — a nearly 137 km drive between the two communities.

Her minor hockey was played primarily with boys teams in both communities, with Campbell’s aspirations at the time to one day lace up the skates for the Montreal Canadiens.

That goal wasn’t achieved, but another continued to grow as she made her way through the women’s hockey ranks: playing international hockey for her home country — a goal that led her to leave her home province.

“Going through Team Saskatchewan programs, all the years growing up. Developmentally, that led me actually to move out west to BC, where I went to a Hockey Academy and realized my dream,” Campbell told CTV News.

Campbell said her Hockey Canada experience was about a 10-year process, but felt fortunate that she was able to continue her NCAA Division I career in New York, with the Cornell Big Red program.

There, she played four seasons – the final, as captain – while participating in three Hockey Canada events in the U18s in 2009 and 2010, along with her final Women’s World Championships in 2015.

That was when Campbell made the decision to retire from the game at 25.

For the past few years, Campbell has been running her power skating program, JCPowerSkating, along with work in the USHL, AAA levels locally in her new hometown of Chicago, which opened doors across the pond for the Saskatchewan-born Campbell.

She has coached in in the Deutsche Eishockey Liga (DEL) for Germany’s Nurnberg Ice Tigers, which led to a role with the German national team.

“It's been a crazy journey for me to transition from playing right away to coaching, but I got to work with a lot of really good athletes from youth level learners, the pros and my goal is, as a coach (to) be coaching at the highest level,” Campbell said.

She explained that her skill set may seem unique to some, especially with the emergence of a more skilled game overall in hockey.

“I think my value proposition to players was working and that's where I think it allowed me to get to the position on that right now and a little bit quicker than I anticipated, but I'm really excited about it and really grateful for the opportunities ahead now as a coach,” she said.

In terms of getting behind the bench, Campbell credits her coaches in her hockey career, but it was the support from Saskatchewan that gave her the extra push to continue her hockey career.

“It was the same people and the same coaches that I had that are my biggest supporters and believers,” Campbell said. “

“Leo Parker, he's always someone I'd give a shout out to because he had such a profound impact on me at a young age … he treated me as one of the boys, and he taught me at a young age and as a young girl, that (I could be) whatever I want to be and whatever dream of I have, to go right after it.”

Campbell said she has not been able to make it back to Saskatchewan as much as she would have liked over the past few years. With the COVID-19 pandemic came times where she has just stayed in Illinois, or has been stuck travelling for her work, rather than home.

“I get emotional talking about these places … honestly COVID was a tough, tough few years of being away. But for me, (every) time I touched down in Regina at the airport, I get this overwhelming (feeling). Just sense of peace, of knowing that these are my people,” Campbell said.

“When you grow up in small towns, with big dreams like I had in Rocanville and Melville, and you're surrounded by so many people that are cheering you on for that dream and the size of that dream … for me this journey, this path, is for Saskatchewan and it's for the people that that have been behind me.”

While many in the game look for the firsts in hockey, Campbell said she’s in no rush to push for a full-time NHL position – but it may not be for the reason you’d think.

“It's not a race for me to get to the NHL. For me, it's a race every day to get better and to be prepared and to know what I'm doing. And that I can't take my foot off the gas, on that mindset of growing and being better and equipping myself with the knowledge and the skills,” she explained.

“When I was at World Championships and the outpouring amount of support the people around this whole trailblazing conversation (gave me), now you're showing what's never been done. You're standing there, representing so many. I stood there and I looked out beyond me and it was actually just such a familiar space for me because I've seen myself as a coach, I've conducted myself among the pros.”

The two weeks in Finland opened up doors for Campbell. But, she believes it was more from the players’ standpoint than the actual decision-makers in the game of hockey.

“They bought into what I was coaching and what I was saying. The messages I was bringing into the team and I think the players are the biggest reason why I am here, where I am now,” she said.

That experience led to an invite to join the New York Rangers’ development camp coaching staff.

“I've had some really good people promoting and encouraging me and I think that led to some key people in the Rangers organization that knew I wanted to be coaching at a pro level and they opened up the door in New York for me,” she said.

New York is a long way from Rocanville – 3,000 kilometres m, to be exact on foot – but as Campbell ties her skates at the upcoming Rangers development camp, where her dream began will still be in the back of her mind.

Campbell can still recall the boiler rooms, the janitor closets, the figure skating rooms, all places where she needed to get ready pre-game while playing boys hockey across Saskatchewan’s southeast.

“It wasn't harder as a female. It was just different,” she said. “I wanted to be one of the boys … because if you're one of the boys, the further you're going to go. I don't know if that was the right mindset. But that mindset I think, took me throughout my career and it kept me focused on my goals.”

“I never saw the limitations or the barriers that existed for girls hockey players. I just wanted to continue to chase after my dreams.”

She said as a girl, the women’s hockey dream wasn’t instilled until she saw the Olympic competitions, where the Cassie Campbell’s of the world dawned the red and white jersey for Canada.

While the professional women’s hockey ranks continue to work towards getting one singular premiere league, the transition to coaching gave Campbell a whole new look into where she could be.

But those boiler rooms are still in the back of Campbell’s mind.

“You think about the qualities that that instills in you. To just stay focused on your own goals, not to worry about all of the other stuff that are challenges to work through — I think that it’s grounded me as a person and as a professional, now coach,” she said.

“I'm grateful for all of the challenges that had been planted in my career because if it weren't for them, I would not be where I am.”

Economists predict a 'mild recession,' but what would that look like in Canada?

With inflation on the rise and central banks poised to increase rates, CTVNews.ca speaks with experts on whether Canada will experience a recession, and if so, what it would look like.

For the second time in less than a month, a resident of Ashcroft, B.C., died while waiting for health care after having a heart attack mere metres from a local ambulance station.

'I have to fight for myself': Quadriplegic man says N.S. government told him to live in a hospital

A diving accident at 14-years-old left Brian Parker paralyzed from the chest down. Now at age 49, he's without the person who was caring for him full-time until just last week, after his 68-year-old mother was diagnosed with breast cancer.

Canadian home sales fall for 5th month in a row, down 29 per cent from last July

Canada's average resale home price fell 4.5% from a year ago in July and was down 5.4% on the month as buyers continued to sit on the sidelines amid rising borrowing costs.

British drug regulators have become the first in the world to authorize an updated version of Moderna's coronavirus vaccine that aims to protect against the original virus and the omicron variant.

Thousands of Afghans who helped Canada trapped in Afghanistan, struggling to leave

Canadian MPs and veteran groups are urging ministers to do more to help thousands of Afghans who assisted Canadian Forces, but remain trapped in Afghanistan a year after the Taliban seized Kabul.

The top executive at Pfizer, a leading producer of COVID-19 vaccines, has tested positive for the virus and says he is experiencing very mild symptoms.

Prince Harry and his wife Meghan, the Duchess of Sussex, will visit the U.K. next month for the first time since they returned for Queen Elizabeth II 's Platinum Jubilee celebrations.