'It's disheartening:' Tipis start to come down at Saskatchewan legislature 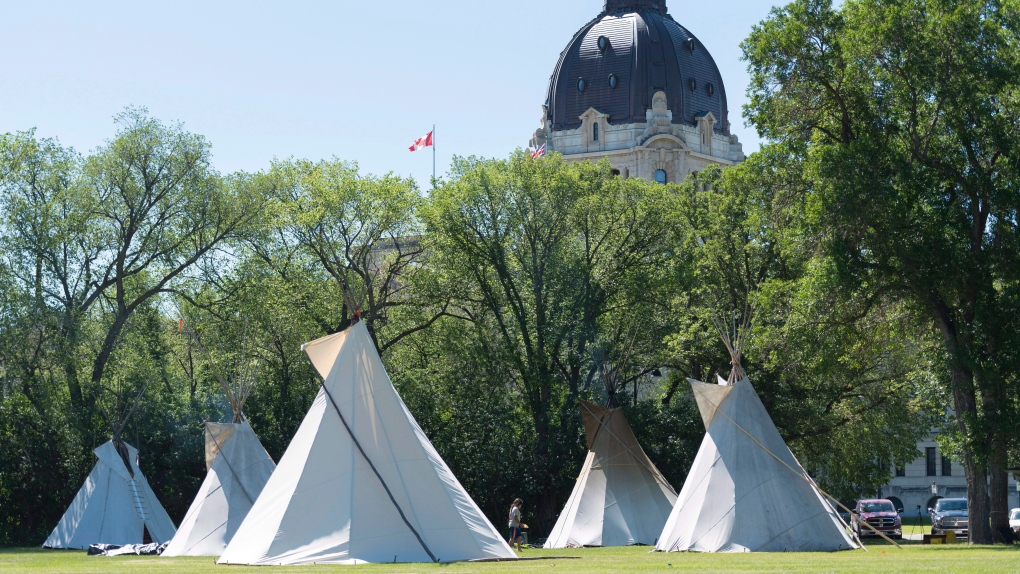 Teepees are seen at the Justice for Our Stolen Children camp near the Saskatchewan Legislative Building in Regina on Wednesday June 27, 2018. (THE CANADIAN PRESS/Michael Bell)

Tipis are starting to come down at an Indigenous protest camp on the grounds of the Saskatchewan legislature, but what the protesters do in the future remains unknown.

On Friday, a judge ordered that the Justice for Our Stolen Children Camp be dismantled after the government applied for a court-ordered eviction.

There had been 15 tipis in the camp at one point, but that number was down to 10 by Monday morning. At least two of the tipis came down after the court order, while others were taken down for the annual Treaty 4 Gathering in Fort Qu'Appelle, Sask.

Regina police spokeswoman Elizabeth Popowich said the department was in talks with the province and protesters.

"The chief has said he expects a resolution in the near future," Popowich said in an emailed statement.

No deadline was specified in Justice Ysanne Wilkinson's order to take the camp down.

Protester Richelle Dubois said it's disheartening to see the number of tipis shrink.

"It shows the province's true colours and how they feel about First Nation children and communities," she said.

The campers have been protesting racial injustice and the disproportionate number of Indigenous children in care since late February.

Robyn Pitawanakwat, a spokeswoman for the camp, said protesters are still undecided about where to go from here.

Protesters held several meetings over the weekend to discuss their options.

Lawyer Dan LeBlanc, who represents the protesters, wasn't immediately available for comment. A spokesperson for the provincial government declined to comment further on the future of the camp.

Pitawanakwat said spirits are good at the camp and people have been united since the court order. She wants the focus to be on issues they've brought forward, rather than bylaws and permissions.