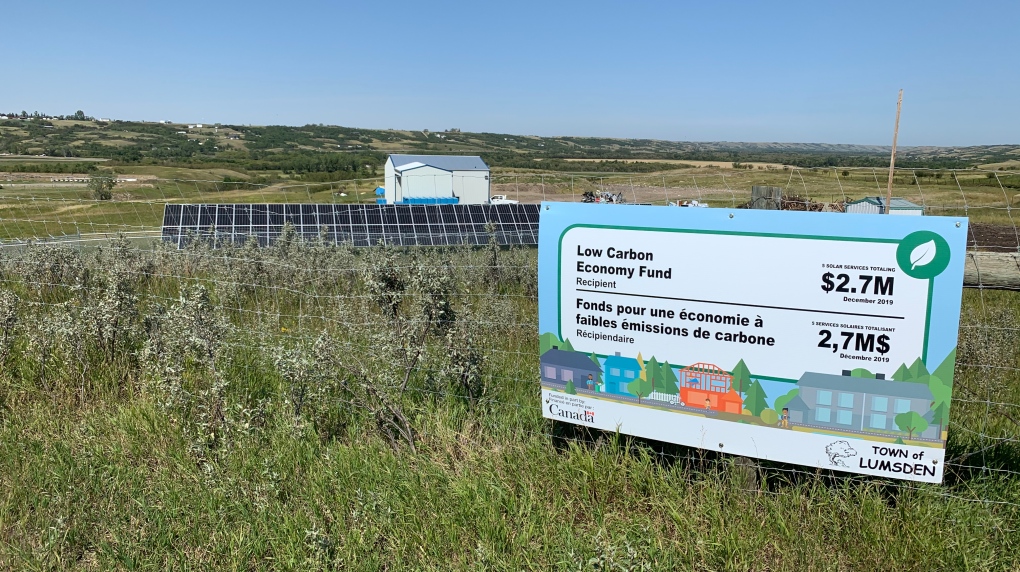 The site of solar panels in Lumsden. (Colten Wiens/CTV Regina)

REGINA -- The Town of Lumsden has received $1.1 million from the federal Low Carbon Economy fund to support solar panel projects in the area.

The cash will help cover 40 per cent of project costs to install solar panels at the solid waste plant/recycling centre, the wastewater treatment plant and two sewage lift stations.

The electricity will be produced and stored by using 616 solar photovoltaic panels, and 500 kilowatts of batter storage.

The wastewater treatment plant will also have battery storage installed, allowing in to run on solar power at all times.

The solar project will provide at least 68 per cent of the power needed to operate the new wastewater treatment facility, Matheson said.

When construction is completed, Lumsden will have the largest battery storage facility in western Canada, he said.

Installation of the panels at the wastewater plant will begin as soon as possible and is expected to span the size of two football fields.

The project is expected to save the town more than $2 million at the wastewater treatment plant and $200 thousand at the other three facilities.

Money saved is expected to be put into other climate change initiatives in the town.

Over their lifetimes, the projects are expected to reduce greenhouse gas emissions by 13,200 tonnes - the equivalent of taking 4,000 cars off the roads for one year.