REGINA -- Scouts from professional hockey league teams have descended on the WHL hub in Regina to assess the next generation of talent.

Evaluators from almost every NHL team – including the Seattle Kraken expansion team – are watching all seven WHL teams, with dozens in attendance each game.

“We’re all looking for what we consider the best player,” said Brad McEwen, who works with the Vegas Golden Knights. “How they separate themselves in their play and their demeanour on the ice.”

For most of the past year, scouts have had to rely on video footage, which has made player assessments challenging. However, with 24 games in 48 days, they’re thrilled about the volume of talent they can watch in the WHL hub.

“Two games a day, for the most part, you roll through the teams. It’s really kind of a scouts dream to be honest,” McEwen said. 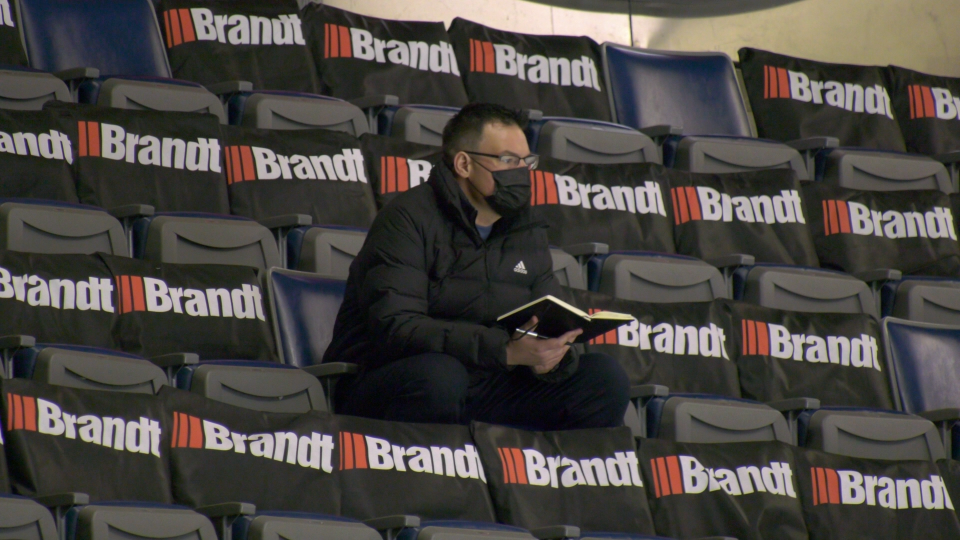 There are currently six players in the hub that have been drafted into the NHL, including Winnipeg Ice forward Peyton Krebs, who was drafter to the Vegas Golden Knights in 2019.

McEwen still keeps an eye on Krebs but his priority is fresh talent.

“Our development team is always looking for information to help Peyton and give feedback,” McEwen said. “Our job is to create a list of players that we believe are candidates for legitimate prospects for the Vegas Golden Knights.”

The job has been described as lonely at times, with a lot of travelling and hotel rooms. But for Ross Mahoney, who was the director of amateur scouting for the Washington Capitals for 16 seasons, it’s exciting.

“It’s a tremendous job, I mean, you have an opportunity to do something you love, to stay involved in the game and make a good living from it,” Mahoney said.

The scout is now the assistant general manager for the Capitals. He approaches player evaluation with an open mind.

“I try not to read the reports [from other scouts] until I’ve seen them play at least once or twice so I form my own opinon on them,” Mahoney said.

The focus for scouts is mostly on 17-year-old players who are eligible for the NHL draft. However, some organizations, like the Capitals, have scouts who watch younger players.

“We’d like to know in draft year when they’re 17 or 18 if they’re still trending upwards and not levelling off,” Mahoney said.

Both McEwen and Mahoney got their start working in junior hockey in Saskatchewan. Mahoney was an assistant coach with the Regina Pats, while McEwen was the head coach and general manager with the Melville Millionaires.

Many of the scouts who get involved with player evaluation often have their sights set on larger front office positions.

“I would think most of the guys probably have aspirations to become a general manager,” Mahoney said.

Mahoney has assisted in drafting 12 players who helped Washington win a Stanley Cup in 2018, including Alexander Ovechkin.

“You take pride with your amateur scouts in the sense that they’ve done a very good job and they’ve contributed to the success of a Stanley Cup champion,” Mahoney said.