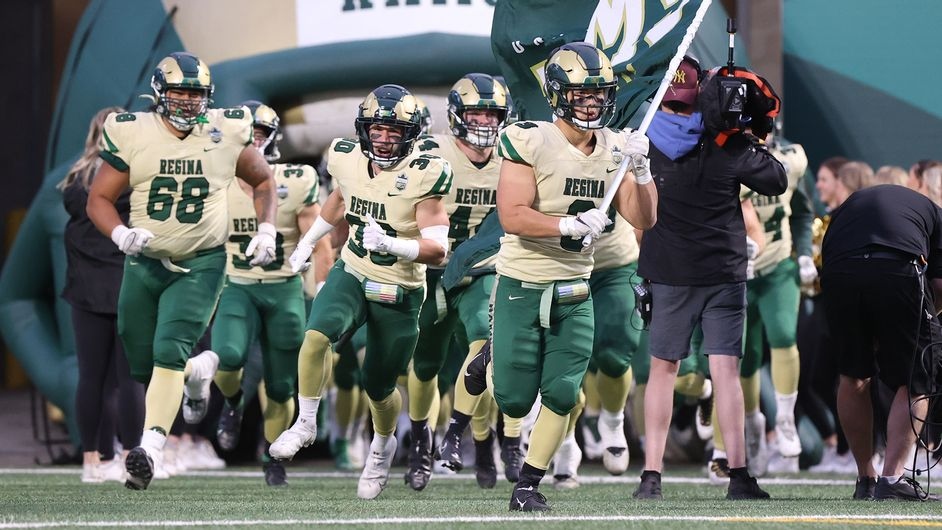 The University of Regina Rams came out on top during their match up against the University of Alberta Golden Bears, ensuring a spot in this year's post-season. (Courtesy: Piper Sports Photography)

The University of Regina Rams have punched their ticket to the Canada West playoffs for the first time since 2017 with a 19-14 win over the University of Alberta Golden Bears on Saturday afternoon at Leibel Field.

Alberta opened the scoring on a 19-yard reception by Orin Schellenberg in the first quarter.

The Rams answered back in the second quarter with an Aldo Galvan field goal, followed by a nine-yard touchdown dash from running back Olivier Savard.

It capped off a 60-yard drive featuring a trio of Riley Boersma runs and a catch as well. The Rams went into the half with a 12-8 lead.

The Rams entered the fourth quarter with a 13-8 lead but quickly expanded the lead to 16-8 with a 32-yard field goal from Galvan with six minutes remaining.

The Golden Bears didn’t go away quietly. Dakota McKay scored on a late touchdown but the Bears could not convert on the two point try to draw them close.

Rams quarterback Noah Pelletier then led an 11-play, 77-yard drive that killed 4:42 off the clock and resulted in a field goal to make it 19-14.

“I’m so proud of the way our guys battled,” said Rams head coach Mark McConkey following the game. “I know we’re 4-1 heading into the bye week, but I still feel like this team has a ton of room to improve moving forward.”

Pelletier finished the afternoon 20-for-34 for 227 yards. Bennett Stusek led all Rams receivers with six catches for 99 yards.

Rookie Olivier Savard, who was making his U-Sports debut, rushed 16 times for 64 yards and a Regina touchdown.

The Rams now enter their bye-week. They return to action on Saturday, Oct. 15th against the University of Saskatchewan Huskies in Saskatoon.

BREAKING | Arrest made in gruesome 1983 murders of 2 Toronto women

A former employee of Quebec's power utility charged with spying on behalf of China has been freed on bail while he awaits trial.

WHO renames monkeypox as 'mpox'

The World Health Organization announced Monday that 'mpox' is now the preferred name for monkeypox.

Why organ donations are declining and how governments are reacting

Ontario and Nunavut opted into new legislation by the federal government hoping to increase organ donations as hundreds of patients die while on the waitlist each year.

Wouldn't it be nice to never have to work again? While this may sound like a dream to many, it is entirely possible. CTVNews.ca personal finance contributor Christopher Liew shares a handful of helpful tips on how to potentially achieve financial independence.

Prime Minister Justin Trudeau will visit a First Nation in Saskatchewan that was rocked by a deadly stabbing rampage nearly three months ago.