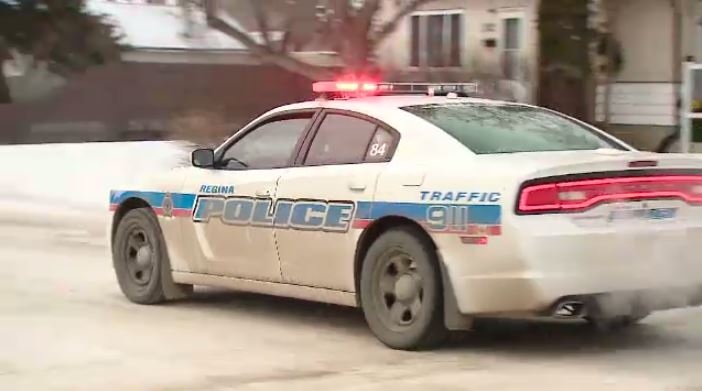 A Regina police cruiser drives on a snowy road.

A 41-year-old Regina man has been charged with assaulting a peace officer after allegedly spitting in a police officer’s face during an altercation at a business on Sunday afternoon.

Regina police were called to the 1700 block of Dewdney Avenue East for the report of a man who was described as an “unwanted guest.”

When police told the man to leave the business, he refused and an altercation ensued.

One officer grappled with the man. After a struggle it’s alleged the man spit into the face of the second officer.

The accused made his first court appearance on Monday.

Regina police said the first officer did not sustain serious injuries. The second officer was placed under a medical protocol that is carried out when an officer comes into contact with bodily fluids.

BREAKING | Jason Kenney steps down after 51.4 per cent approval in leadership review

Ed Fast is no longer the Conservative finance critic, interim party leader Candice Bergen says. Bergen said in a statement late Wednesday that Fast informed her he will be 'stepping away from his duties.'

Matthew Tkachuk scored a hat trick for the Calgary Flames in Wednesday's 9-6 win over the Edmonton Oilers to open their NHL playoff series.

It has been almost exactly one year since the Tk'emlúps te Secwépemc confirmed evidence of what elders and residential school survivors had been saying for years about missing children being buried on the grounds of the former Kamloops Indian Residential School.

The second strike in CFL history is over. The CFL confirmed Wednesday night that it and the CFL Players' Association reached a tentative collective bargaining agreement.