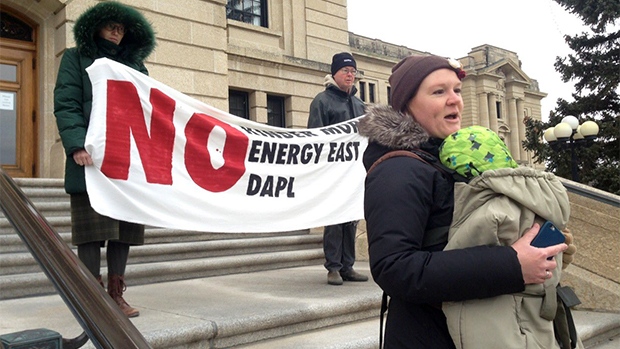 Regina residents with signs reading, “No Pipelines” and “No Kinder Morgan” gathered in front of the Legislative Building as part of a cross-Canada vigil opposing the Kinder Morgan pipeline.

The group says they are against Prime Minister Justin Trudeau who will make a decision on the approval of the Kinder Morgan Pipeline by December 19. They accept Trudeau’s action on a Carbon Tax but they do not want Trudeau to approve the pipeline.

“Trudeau’s climate plan is a step in the right direction, but approving Kinder Morgan would be a giant leap backwards,” said Darin Milo, a union activist and organizer of the vigil.

“A lot of us feel that we need to look at transitioning to a more sustainable economy. You have the oil economy which can be boom or bust, well it is boom and bust right now. Having something more stable, transitioning into renewables so you have steady work for everyone, that is what we need,” said Milo.

If approved, the current pipeline would be twinned from Alberta to Burnaby, BC.

The group is also against Premier Brad Wall and his views on supporting pipelines and opposing Trudeau’s carbon tax.

“Brad Wall is one of the biggest obstacles to any action on climate change in Canada,” said Emily Eaton, rally organizer and associate professor with the department of geography and environmental studies at the University of Regina.

The group was made up of a coalition of environmentalists, First Nation people and labour activists who also oppose the expansion of the Dakota Access Pipeline in North Dakota and the Canada’s Energy East pipeline.

After the rally, the group presented a hand-made giant letter with calls to action to Wall. Some of the actions included reducing CO2 emissions, making a transition from coal and adopting and implementing the United Nations Declaration on the Rights of Indigenous People (UNDRIP).

“I think there’s very little issue being brought to the issues as it sits right now. If you look at the issue in Standing Rock, it’s a global issue yet the media is not picking up on it. It’s events like this that are happening across Canada that starts to bring attention to it,” said Milo.