Sask. follows advice on AstraZeneca vaccine, not immunizing those under 55 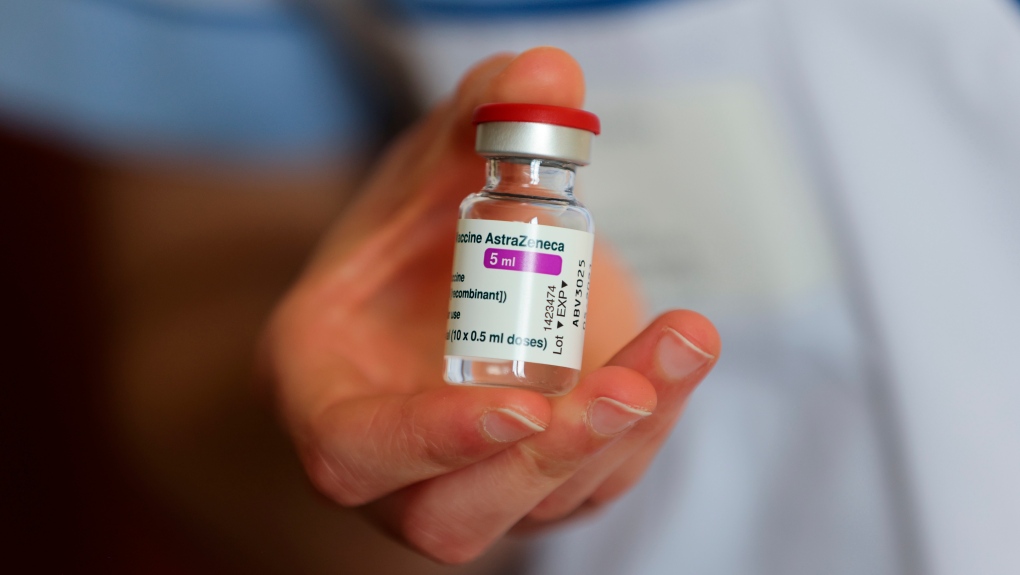 A member of the medical staff shows the vial containing the AstraZeneca COVID-19 vaccine dose for Prime Minister Jean Castex, at the Hopital díInstruction des Armees Begin, in Saint-Mande, on the outskirts of Paris, Friday, March 19, 2021. (Thomas Coex, Pool via AP)

REGINA -- Saskatchewan says it's following national advice that recommends not giving shots of the Oxford-AstraZeneca COVID-19 vaccine to those under 55 years of age until a further safety review is done.

The Ministry of Health says most of the 15,000 doses of the vaccine that have been received so far have gone into the arms of those 58 and older at a drive-thru clinic in Regina.

It says some health-care workers younger than 55 have also received these shots, but to date no adverse effects have been reported.

The province says it has fewer than 100 doses of AstraZeneca left, but another 46,600 are expected to arrive this week from the United States.

Nearly 180,000 vaccinations in total have so far been done in Saskatchewan and officials say they will see what impact suspending AstraZeneca shots for younger people has on its immunization campaign.

The province also continues to battle a spike of COVID-19 cases in and around Regina, which has driven the province's average of new daily cases back up to around 200, a number last seen during the winter surge.

Another 202 new infections were reported provincewide on Monday, with 101 located in the capital. There were 162 people in hospital, with 25 of them in intensive care.

Health officials are also warning that more infectious strains of the virus, which have taken hold in Regina, are now increasing in Moose Jaw.

Of Saskatchewan's 1,474 reported variant cases, 1,222 have been found in and around Regina, while another 109 are from the health zone that includes Moose Jaw.

The Health Ministry began asking Moose Jaw residents over the weekend to stay home and avoid having guests, even though the province lifted its ban on household visits several weeks ago to allow up to 10 people inside a home at once.

Premier Scott Moe reinstated that restriction onto households in Regina and surrounding communities last week in response to the city's concentration of variants, which at the time he said was one of the worst spreads per capita in Canada.

Saskatchewan NDP Opposition Leader Ryan Meili has called on Moe's Saskatchewan Party government to extend that ban and other public-health measures specific to Regina to Moose Jaw, like the closure of bars and restaurants to in-person dining and a 30-person cap on worship services.

The strain first identified in the United Kingdom, known as B.1.1.7, has been the one most commonly found in Saskatchewan.

"Dr. Shahab continues to monitor the situation across the province, including in Moose Jaw," said press secretary Julie Leggott.