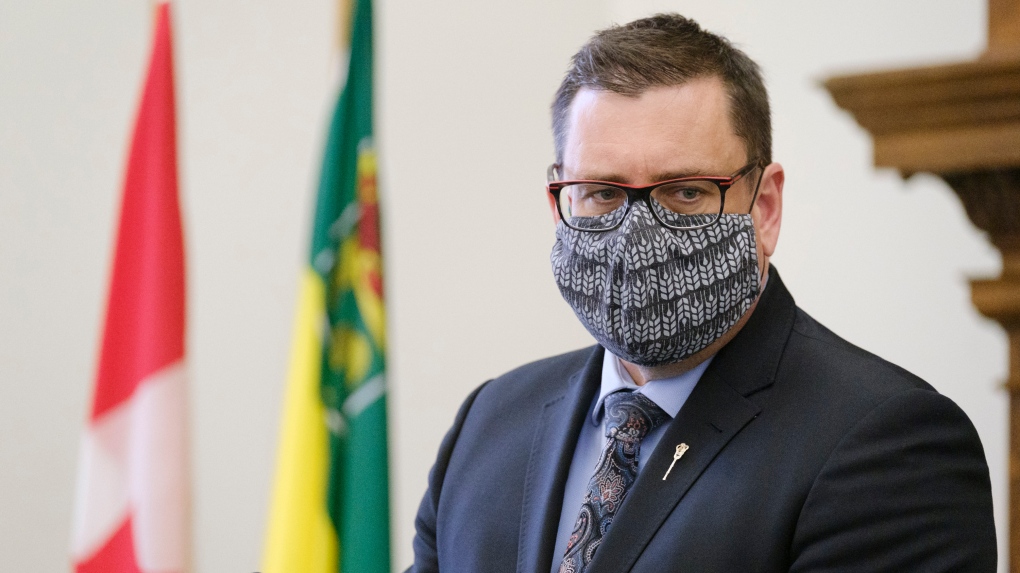 Minister of Health Paul Merriman speaks on Budget Day at the Legislative Building in Regina on Tuesday, April 6, 2021. THE CANADIAN PRESS/Michael Bell

REGINA -- Saskatchewan’s health minister says he is “extremely concerned” about the current COVID-19 situation in Regina, but the province won't be straying from its vaccination strategy to address the problem.

On Tuesday, Health Minister Paul Merriman said even though Regina's intensive care units are breaking records with the number of COVID-19 patients admitted, provincial capacity is still in good shape – meaning they have the ability to move people around if there is a surge in one particular area.

The government said it will use vaccines to protect the province’s overall ICU capacity.

Doctors have called on the government to pivot its current age-based vaccine strategy to target essential workers, which they say are being hit particularly hard by the variant-fuelled third wave.

"We anticipate that the supply [of vaccines] is going to be less of a concern and less of an issue in the next week or two and so we can prioritize frontline workers while at the same time continuing to vaccinate by age, it’s not an either/or proposition anymore," Dr. Alex Wong, an infectious disease physician, told CTV News on Monday.

Premier Scott Moe said the current age-based criteria is the “most efficient and quickest way” for everyone, including frontline workers, to have access to the vaccine.

“The challenge we have with changing the priority moving forward, is it’s going to slow down our ability to deliver the high volume of vaccines that we’ve been unable to thus far,” said Moe.

Merriman maintained seniors still have the highest risk of fatal outcomes associated with COVID-19 and echoed Moe’s statement that changing course now would slow the vaccination process for the entire province.

Dr. Eric Sy, a critical care physician at Regina’s General Hospital, said Monday that variants of concern are seriously impacting younger people and have made the situation in Regina “substantially worse than before.”

"Unfortunately, that means that there’s a lot of young people that are sick on ventilators and life support machines. And that’s going to translate to some people not surviving," said Dr. Sy.

At the province’s COVID-19 update one week ago, the premier said the rising number of young people catching COVID-19 “speaks to the fact that the vaccines are working.”

According to Merriman, there are currently more than 36,000 AstraZenca doses in the province that have yet to be used because national guidelines only recommend the shot for people over the age of 55.

He said the restriction on that specific vaccine is a “larger barrier” to getting doses to a wider population. The minister said the province is looking at what it needs to do to get the most vaccines to Saskatchewan people, and he hopes the National Advisory Committee on Immunization will be move the age limits on the AstraZeneca vaccine down.