Sask. may see doubling of COVID-19 cases in next 6 months, new modelling shows

REGINA -- Saskatchewan may see at least a doubling of COVID-19 cases across the province over the next six months, according to new government models.

The models, released on Thursday, show the province, at best, could have an additional 4,830 cases (76 per day) and five hospitalizations per day over the next six months.

There would be an additional 34 deaths over six months in this scenario.

However, the models show bleaker scenarios for the province.

Worst case, the province could see 469,000 additional cases (8,390 per day) and 677 hospital admissions per day over the next six months.

There would be an additional 4,800 deaths over this period in this scenario.

The models can only tell people what may happen over this period and they are dependent on a number of factors.

For instance, in the best case scenario, 60 per cent of people need to be wearing masks, 20 per cent of the public would be engaging in private gatherings, and only five people would be involved in these gatherings.

Between the optimistic and pessimistic scenarios are two versions that estimate the current state of the province.

The province’s latest seven day rolling average has Saskatchewan between version one and two. 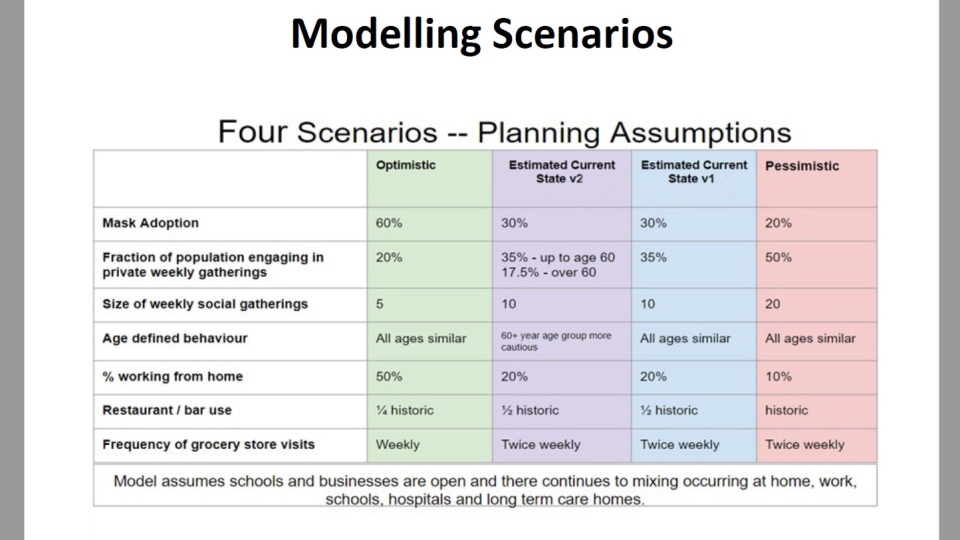 During the press conference, Shahab showed a dial of where the province is at in terms of being in the danger zone.

Provincially, the province is in the dark orange zone, meaning one person with COVID-19 is infecting more than one person.

Regina and integrated rural areas are also in the dark orange zone, while Saskatoon is in the orange zone and the integrated north area has reached the beginning of the red zone.

Shahab said the province needs to be in the green zone, where one person with COVID-19 is infecting fewer than one person. 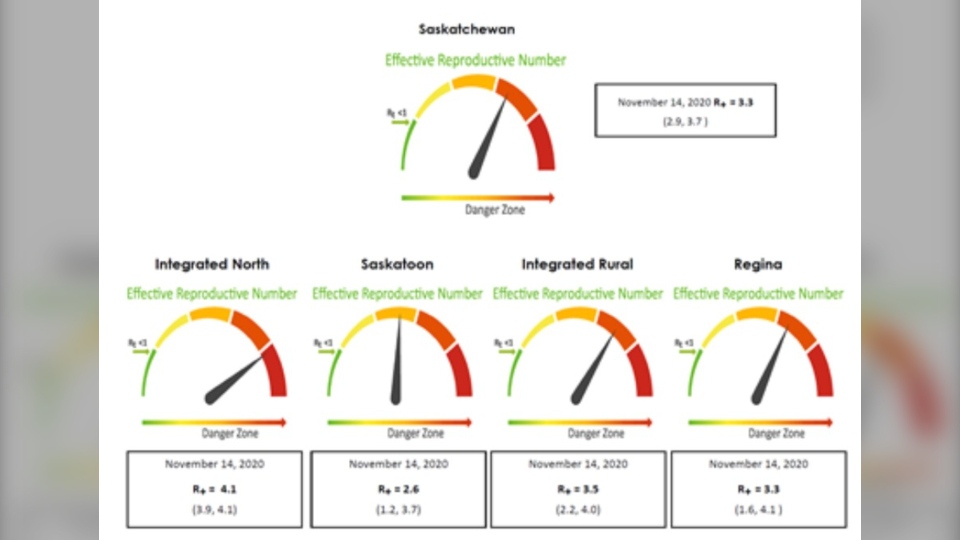 Saskatchewan as of Nov. 19 is in the dark orange zone. (Government of Saskatchewan)

Shahab said the province is seeing a surge in cases.

The province is third in the country with the most active cases per 100,000 people. The test positivity rate provincially is 6.7 per cent.

“All of these things are creeping up and we want to see that turned around,” he said.

He described this situation as the province’s first wave and first test to handle the pandemic.

Shahab said the province needs cases to fall and then slowly burn out, which would allow officials to better manage the situation going forward.

“Through fairly simple measures, we can bend the curve,” he said.

The longer it takes to bend the curve, he said, the province will need to further intervene and add new restrictions, like a lockdown.

He said the average person has about 11 close contacts, and that the government is receiving help from the federal government for contact tracing.

As well, the province has hired more staff and re-deployed employees to support tracking efforts.

“The next few weeks will be important,” Merriman said. “This pandemic will only end when we have widespread access of a safe and effective vaccine.” 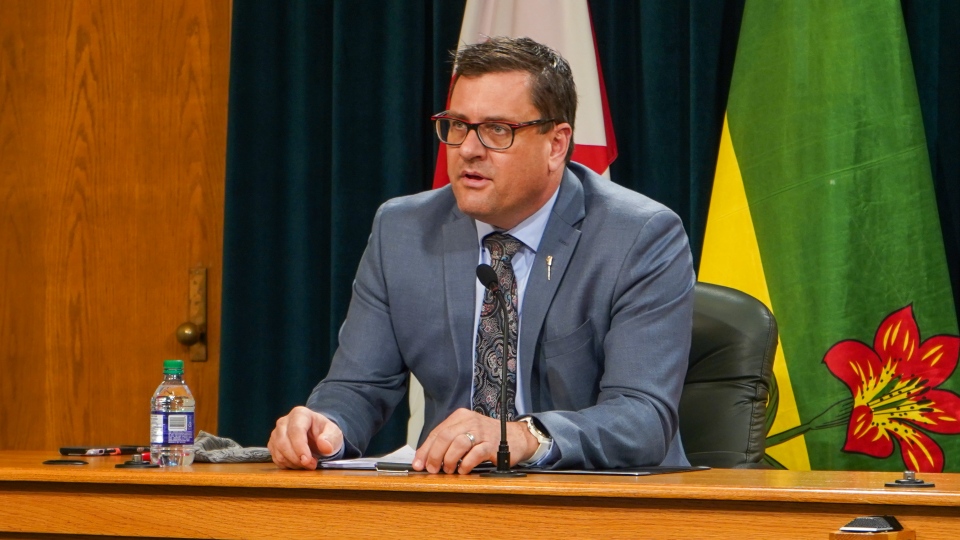 The province expects to receive approximately 180,000 doses of a potential COVID-19 vaccine.

Merriman said the federal government has secured an initial batch of six million doses of a COVID-19 vaccine to be distributed in the first quarter of 2021.

Shahab said he expects the province to be in a better place come next fall should more people get vaccinated.