REGINA -- A person in their 50s from the far north region has died due to COVID-19 complications, according to a release from the province.

The province said Tuesday that another death is currently under investigation.

“We are saddened to report that there has been another death in Saskatchewan from COVID-19,” Premier Scott Moe said at the province’s daily update on Tuesday.

Moe said the other death, which is currently under investigation, would likely be reported Wednesday if it is related to COVID-19.

“COVID-19 fatalities must be confirmed by the medical health officer to ensure that the case meets the criteria in order to be documented in the epidemiological reporting tools, before they can be publicly reported by the ministry,” the province said in a news release.

Deputy Chief Medical Health Officer Dr. Denise Werker said the province will only release the zone of deaths in the province.

“We don’t provide any other personal detail about this because the data is collected under the Public Health Act,” Werker said. “We would only disclose information if it served a public health purpose.”

Werker said COVID-19 is a respiratory illness spread through droplets produced through coughing or sneezing.

“Providing further detail on the exact geographical location of an individual who died doesn’t protect the health of individuals,” she said. “Everyone should take precautions.”

There were no new cases announced on Tuesday in Saskatchewan. The provincial total sits at 634 cases, with 77 considered active. 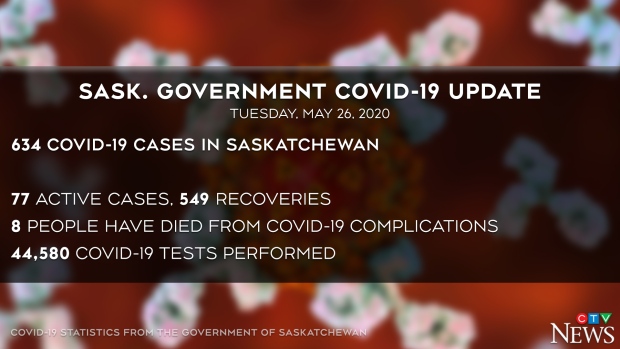 The premier said the province has reported more recoveries than new cases for 16 days in a row.

There are five people in hospital in Saskatchewan, including three in the ICU in Saskatoon. There is also one person receiving inpatient care in Regina and one in the north region.

As active cases in Saskatchewan continue to drop, Moe said he shares concerns from residents about temporary emergency room closures.

“I understand that our health care system has had to make some make some difficult decisions to prepare for the potential of possible surge of COVID-19 patients,” he said.

The premier said the closures aren’t permanent and some will open again in mid-June.

“It has always been the plan to reopen these facilities, and the sooner that occurs, the better,” Moe said. 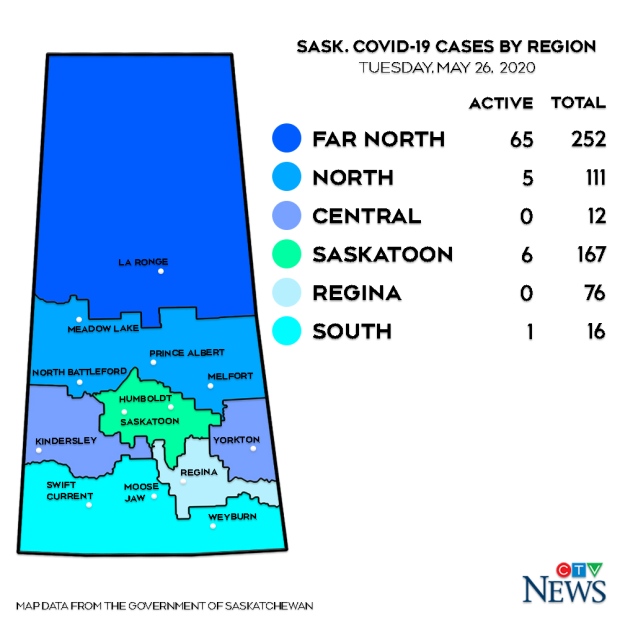 “We report cases and deaths by place of residence,” Werker said.

She said this is standard practice across the country.

Any risk information in a certain area would be disclosed to the public, Werker said.

Of the 634 cases in Saskatchewan, 141 are from travel, 361 are from community contacts, 77 have no known exposure and 55 are under investigation.

Eight people have died from COVID-19 complications in Saskatchewan so far.

On Tuesday, the province announced a new Statement of Principles for “protecting the health and safety of health-care workers, patients, clients and residents.”

In a release, the government said the document was developed through weekly meetings between the province, the Saskatchewan Health Authority and its union partners, including SEIU-West, SGEU, HSAS, SUN and CUPE. The principles discuss the current state of personal protective equipment (PPE), supply chain processes and keeping people safe.

The Saskatchewan Government will provide an update on the latest COVID-19 information in the province at 2:30 p.m. ctvnewsregina.ca and ctvnewssaskatoon.ca will stream the press conference live.